Yesterday we went to downtown DC to do a little sightseeing. First we hit up the National Botanical Gardens for their Christmas train display. Its really cool- the train goes through a little village where the buildings are constructed entirely of plant/natural material. I think they change it every year- this year had little houses themed like various animal critters, Presidential birthplaces, and some DC monuments. Here's a small sample of what we saw: 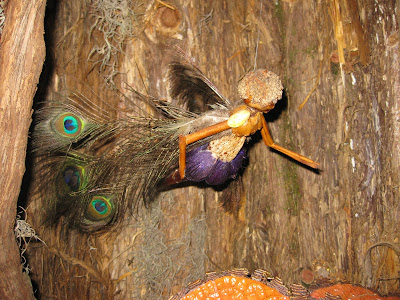 They had a bunch of fairies floating about made of various sticks and twigs and feathers. This one with the peacock wings was my favorite! 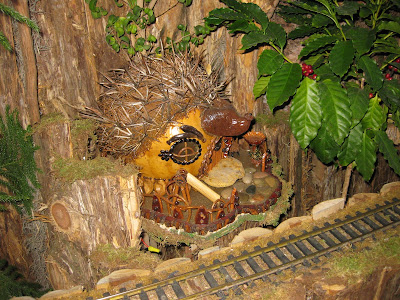 Porcupine Palace. Love the thorns and the little slide. 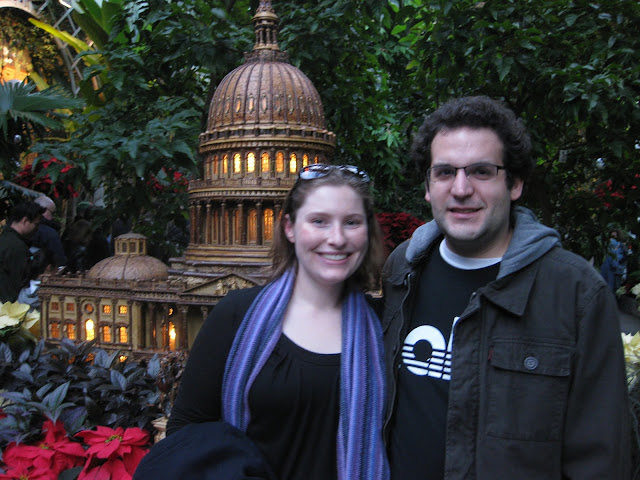 The monuments were the coolest ones, with the glowy lights coming from inside the windows. Here we are with the Capitol. I like to imagine there are hundreds of tiny Congressmen in there arguing about taxes.
Today boyfriend and I started our day with a 4 mile run. It was cold and windy and there were hills! I have never worn a fleece hat to run before. I was wearing: a long sleeve compression shirt, Lululemon short sleeved tee, my new Athleta jacket, yoga pants (I don't have any full length running bottoms), and that hat. The jacket was pretty toasty, and kept out the wind really well. The yoga pants.. not so much. Also I got water in my shoe by stepping in a puddle. Frozen toes! 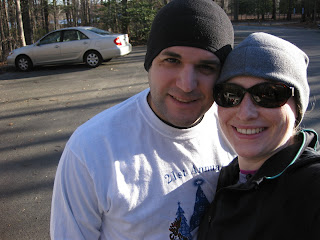 Here I am freezing my ass off, but attempting to smile: It was all fine until one last GIANT hill that let off at this clearing- the hill about killed me and then the wind coming off the water was so cold! 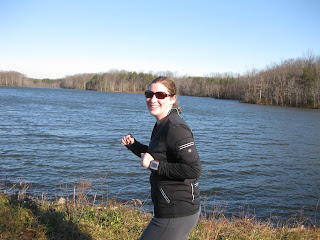 Then we helped his mom clean up the house (pine needles freaking everywhere!) and prepare foods (cookies, entrees, bread, snacks)- they're having cocktails and appetizers here at their house, then we're all going next door for dinner. No menorah pic tonight- I'll light it during cocktails but won't have time to take the picture while everyone is over.

Since its also Christmas Eve (Merry Christmas if you celebrate!), I'll give you this factoid for the 5th night of Hannukah:

Q: Do you believe in Santa? (No joke a coworker asked me this on Monday morning.)
A: No. Jewish kids don't get presents from Santa so our parents do not have any reason to make us believe. I have always known that mall Santas are just guys playing dress up, and that there isn't actually any landmass under the North Pole for Santa and his elf sweatshop to live in, and that parents are the ones who actually buy the presents and put them under the tree. However my parents made us lie to our Christian friends that we believed in Santa so that we wouldn't cause trouble/ruin the magic for everyone else. Can you imagine the calls my mom could have gotten? "My daughter

says your daughters told her there is no Santa!" She didn't wanna be that mom, so we were required to keep up the charade. For this reason I actually contended well into high school that there was a Santa, which made my non-Jewish friends think I was slow.


Nope, no Hannukah Harry either.  Source.

Don't feel too badly for us though. We may not believe in Santa or elves or flying reindeer, but we still believe in miracles- Hannukah is all about the miracles!

Hope everyone has a lovely night, whether it's the 5th night of Hannukah, Christmas Eve, or just December 24th to you.
Posted by Stephanie at 2:12 PM