Happy Hannukah Day 7! Almost over. As a change of pace from my exciting vacation posts, we'll now return to my regularly scheduled boring life:

Today I kicked it off with a trip to the grocery store. I didn't really have any food in the house (except a couple moldy bell peppers that I thought I threw out last Tuesday but clearly did not!) So I went and stocked up on staples. My staples for console are: Hummus, bell peppers and cucumbers for dipping in the hummus, eggs (for scrambling, hard boiling, baking, etc), apples and bananas (perfectly portable snacks!), freezer waffles, and milk (giving reduced fat soy vanilla a try this week). I also picked up the ingredients for fANNEtasticfood's Healthy Chicken Enchiladas! I love casseroles for console because they feed me for a bunch of days, usually reheat well, and are filling meals. Since I eat my dinner at work when on console, I prefer a heartier meal than a bagged lunch would normally be.

After putting all the groceries away I headed out for a 4 mile run.  Finished this run a minute faster than the 4 miler in Virginia. I'm maybe slightly bummed that I didn't shave even more time off, since it was about 4 degrees warmer here and there were no hills. I also ran with my iPod for the first time- I usually don't because I have my running buddy to keep me company. But he's still in Virginia so the cheese ran alone.  The cord was a source of major annoyance to me; gotta find a better cord management method for next time. Any ideas?

Then I tackled the piles of vacation laundry while simultaneously cooking. Does it seem like you have more laundry after a vacation than you would if you spent the same number of days at home? Is it just because unpacking it and then sorting it makes it seem like more? I finished the darks, a necessity since I wore some of that load to work tonight. Then I popped in my warm wash (almost exclusively running clothes). Unfortunately I didn't get a chance to pull those out of the dryer, but I guess with running clothes it doesn't matter too much if I'm a wrinkled mess.

For the enchiladas I used a rotisserie chicken from the grocery- after pulling off all the skin and bones (and sneaking a taste or two) the whole roasted chicken was a perfect 3 cups for the enchiladas.These enchiladas were AWESOME. I don't like sour cream (the inspiration for the recipe), but adding 0% Chobani was the perfect tangy/creamy delicious touch! Snagged the pic after I had already stolen some to pack for work, but it still looks tasty! 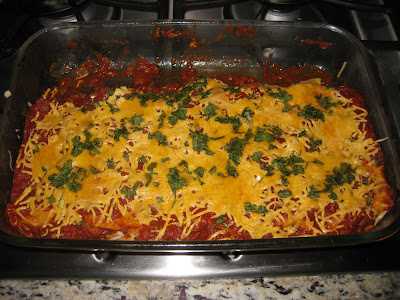 Console foods included: some overnight oats (we'll call that meal "lunch"), a hummus/hard boiled egg mashup plus pita chips for dipping, and a serving of those enchiladas. And I had a snack left for a drink when I get home!

Here's our penultimate menorah and factoid for Hannukah 2011: 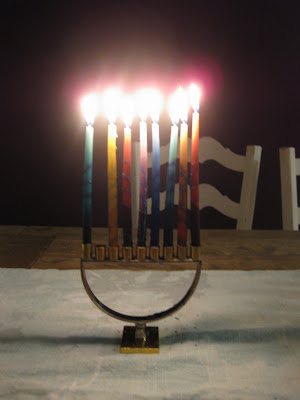 A: No. The most important Jewish holiday is actually Shabbat/ the Sabbath, even though it comes every week. Its most important because it was the only holiday specifically commanded by God (in the 10 commandments). The other important holidays are also explained in the bible. Passover, Sukkot, and Shavuot required pilgrimages to the Holy Temple in Jerusalem in ancient times.. The last two are fairly unpracticed by conservative Jews. Then there are Rosh Hashana and Yom Kippur, referred to now as the High Holidays. If you know Jews in the US, you probably have heard of these holidays as they are the most observed here. Yom Kippur is a fast day where we ask forgiveness for sins from the past year. We believe God passes judgment on us and signs everyone's fate for the coming year, good and bad. This is why its the most observed... better safe than sorry, and nobody wants to be given a bad fate! All of these holidays include prohibition on work, so we can celebrate and pray with our full attention.
Hannukah is one of several non biblical holidays which celebrate more recent (relatively) events in Jewish history. Since they are mandated by rabbis, not God himself, and don't have a prohibition on work, these are generally not considered major holidays. Hannukah is widely practiced, not sure whether this is because its close to Christmas or because its fun and easy.
Posted by Stephanie at 12:22 AM