From our family to yours.... 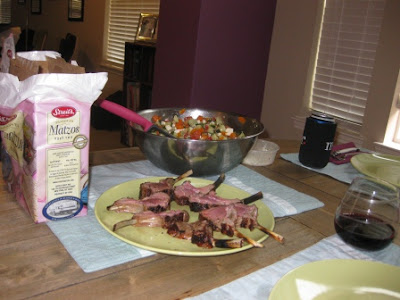 Last week Dan and I hosted Passover at my house, with the help of my parents who slaved all weekend in the kitchen and cleaned my house Monday while I was at work. Thanks Mom and Dad!

Because I'm a bad blogger, there are 0 pictures of it. Which means no documentation of our new wedding china and crystal making their first outing. Oh well.

This morning we went to mass and then brunch with some friends. Dan grew up in Virginia next to a family with four kids... one of whom now lives 10 minutes from our house with his wife and 2 kids. Small world!

This evening we grilled lamb and had it with Israeli salad and, of course, matzah! Hope you're having a lovely Easter/Passover/Sunday!
Posted by Stephanie at 7:08 PM No comments: Links to this post

Previously, we got ready and did a first look. Now, the ceremony.

Writing our wedding ceremony was really interesting. Originally I had planned to write it all on my own because we couldn't find a rabbi and the deacon couldn't officiate since it wasn't in a church (receive the vows or sign the marriage license). Then we were going to use the venue's non-denominational Christian minister to do the ceremony.

In the eleventh hour (ok, in November) I found a rabbi! We had to import him from Dallas, but it allowed me to add some additional Jewish elements that I originally planned to cut out. Both the Rabbi and Deacon were really accommodating, allowing us to use whatever of each tradition we wanted and scrap the rest.  What we ended up with was, in my unbiased opinion, a perfect mix of the two.

In the traditional Jewish processional, the bride and groom are each escorted down the aisle by their parents. We chose this processional style to emphasize that we are not just two individuals getting married but the joining of two families.

At the altar is a chuppah, or wedding canopy. The chuppah represents the home; it is open on all sides, like Abraham and Sarah’s tent, which was always open to welcome guests.

Our chuppah had 3 talit at the top- my grandfathers' on either side and my father's in the middle.

In the Catholic marriage ceremony, the couple selects several Bible readings. We have selected one from the Jewish Torah or Old Testament and one from the New Testament. These readings discuss the biblical basis for marriage in the creation of man and woman, which is shared between Jewish and Catholic tradition.


In a Catholic wedding, the marriage is enacted with the exchange of vows. To honor that, we have chosen to use the traditional Catholic vows.

The Ketubah is a Jewish marriage contract. Traditionally the ketubah detailed the husband's obligations to provide for his wife. Our modern ketubah instead makes promises to each other, much like the vows. In Jewish tradition,the ketubah is signed by the bride, groom, and two witnesses, unrelated to the bride or groom. Our witnesses are our attendants and longtime friends, [names omitted].

And then we were married! (No glass was harmed in the making of our marriage.)

Immediately after the ceremony we went alone to the groom's ready room for the Jewish custom Yichud. This is becoming more common in non-Jewish weddings too, and is basically when the bride and groom go alone together to a room right after the ceremony. I'm undecided on how I liked including this tradition- good to catch your breath or taking away time you could spend with far flung guests? More on that some other time.
Then we snuck out with the photographer for a few more photos before rejoining cocktail hour.

The ceremony went better than I dared hope. Everyone was there (and mostly on time!), the officiants showed up, the chuppah was beautiful. I worried it would be too cold... it wasn't. I worried it would be too dark... it wasn't. Many people remarked afterwards how beautiful the ceremony was; nobody- at least as far as I know- was put off by the parts for the other religion. And nobody said anything about our lack of glass smashing. Plus, we got married!
Read on to the reception....
Posted by Stephanie at 8:00 AM 2 comments: Links to this post

The whole wedding weekend will be covered in other posts, for now let's talk about the actual wedding.

My bridesmaids and I left for the venue at 2. By that time all the makeup and all the bridesmaids' hair had been done at the hotel and my hair was set in curls but not yet finished. The photographers got to the venue a little after 3, to take some getting ready pics.

Then we did a first look. I know there are plenty of strong opinions about the first look, but here are mine:

1. The father walking the daughter down the aisle while the groom looks on from the altar, seeing her there for the first time, is a modern invention. Or maybe, a reinvention of a really old tradition where the bride and groom met on their wedding day and the father didn't so much walk her down the aisle as drag her there. Either way, not really helping your case.

2. Both of our religions support the seeing-each-other-before-the-wedding custom. In Judaism this is called the veiling ceremony, where the groom literally inspects his bride and then puts the veil down on her before the ceremony so he can't be tricked into marrying the wrong woman (a la Jacob in Genesis, being given Leah when he wanted Rachel). In the Catholic tradition, the bride and groom actually walk down the aisle together as ministers of a sacrament, so they would have had to see each other beforehand.

3. It's our wedding, about our being together forever... why should we spend the entire day being forcibly separated?

I loved having the chance to see him before the wedding. I loved that we spent the time leading up to the

ceremony together rather than cloak-and-daggerishly trying to avoid bumping into each other. Being around Dan makes me (naturally high strung and stressed out) calm, one of the many reasons I wanted to marry him anyways. (Mom calls him the lion tamer.) So there was no way I would have wanted to spend those very stressful pre-ceremony hours freaking out, when just having him next to me makes me calmer.

After the first look we took some wedding party and family pictures.

Then Dan and I went to take some other pictures before the guests arrived.

It was great to get the majority of the family pictures out of the way before the ceremony, so we had time to enjoy our cocktail hour and reception rather than be dragged off for constant pictures. We kept the family pictures close family only- parents, siblings and spouses, grandparents. Expanding it beyond that would have been huge- aunts, uncles, and first cousins made up basically the entire rest of the guest list.


The bigger family pictures for the most part didn't happen because corralling everyone during the reception was too difficult. If I had it to do again, I would have scheduled this more rigorously for cocktail hour and had the DJ call out family groups to meet us in whatever picture location, one after another.

We hired a bus to do a few runs between the hotel and the venue. Although they were near each other, we figured this way nobody would have to worry about drinking and driving, or getting lost. We had the bus get to the hotel at 5 and then go back and forth three times to shuttle people. I was nervous about the scheduling being tight but the last bus came about 10 minutes to 6, so we started the ceremony right on time at 6.

to be continued....
Posted by Stephanie at 7:00 AM No comments: Links to this post

We're back! We had a wonderful honeymoon... until I got sick on the last couple days. The flight back was a long day with my nose running like a faucet all the way across the Atlantic.

Oh well, glad I didn't get sick until the end. And I'm getting close to recovering now, just in time to go on the night shift this Friday.

In the meantime, I'm working on some more posts, getting ready for Passover, and happy to report that wedding pics are in...

So far, I think this is my favorite.

Our chuppah was gorgeous, that sunset is perfect. And I married that guy! Pretty cool.

Also I remain irrationally in love with those green ties.

The green ties, purple dresses, and green bouquets. Looks pretty snazzy. Not bad for a girl who's not very good at being a girl. :-)
Posted by Stephanie at 8:02 PM 1 comment: Links to this post