Last weekend my parents came to town to visit, celebrate our second anniversary, and join our (now annual) Super Bowl party. Of course, while they were here, we had to visit a few delicious Houston restaurants. My parents are definite foodies and we always try to explore some new places or introduce them to our old favorites when they visit.

Friday night we went to Oxheart for our official anniversary dinner. Oxheart consistently tops the Top 100 list, and I've been dying to go. However, they only have 30 seats in their tiny dining room and book up weeks in advance. Finally, I checked about a month ago and managed to get a reservation. And... it was fabulous! 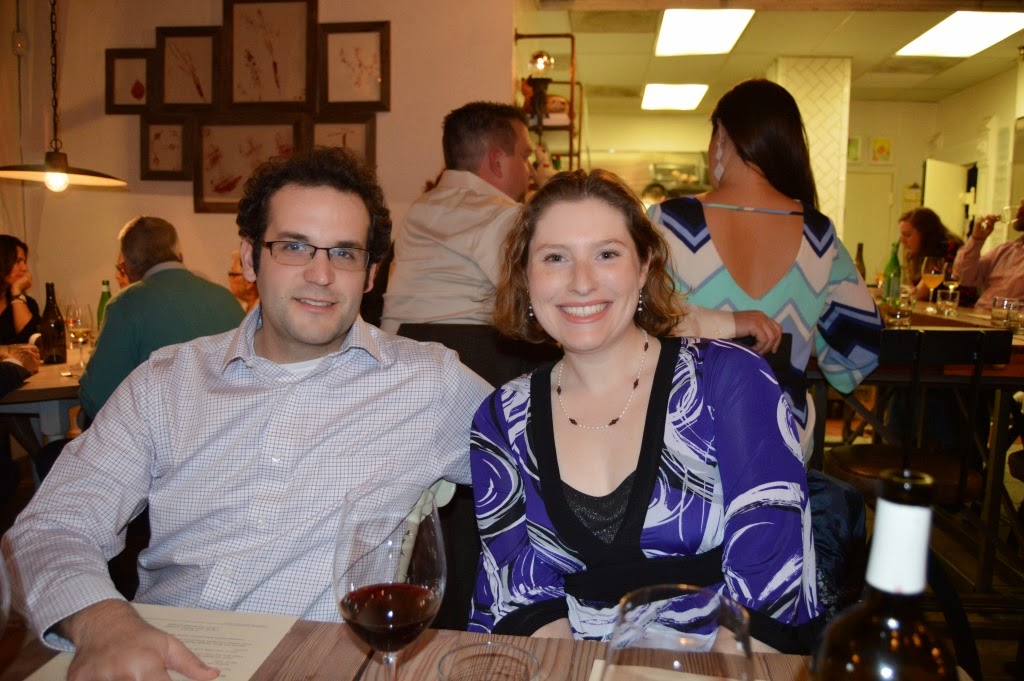 I didn't take any pictures of the food, because I tried to enjoy. They do a 7-course prix fixe menu, and you can choose either regular or vegetarian (5 of the 7 dishes were the same, with the regular menu having a meat and fish course). The main course for the regular menu was wild boar (which everyone else loved) so I ordered the vegetarian. Each course was small, but every bite was delicious. Each element was composed, and the whole meal worked together. While we did not leave stuffed, we did leave satisfied. I would love to go back 1000 times, but my wallet would protest. As a note, while my family are avowed meat eaters, I think we all agreed that the best thing we ate was the smoked butternut squash that I had in place of the fish course. So... don't discount the vegetarian menu. Definitely worth it!

Saturday night we went to El Big Bad, a Mexican bar/restaurant in downtown. Dan and I had been there before with his parents, and another time at a pub crawl. I knew I had to take my tequila loving dad there for some infused tequila. We ordered a salsa trio and some tacos, and drank a couple margaritas. Yum! If you go here, my favorite is the hibiscus tequila, and whatever salsa has pumpkin seeds in it. And... there's also fried chicken skins. A-MA-ZING.

Sunday morning we had brunch at the HEB Niko Niko's. I know its a food counter in a grocery store, but its freaking delicious! And we rounded off the weekend with a big pile of meat from Killen's BBQ on Tuesday before they had to leave. All in all, a weekend of delicious eats. And I haven't even gotten to the Super Bowl party yet...
Posted by Stephanie at 7:00 AM 4 comments:

There are a lot of pregnant women around me lately. (Glances skeptically at the water fountain.) Some are planning to find out the sex of the baby (or in one case, babies!) as soon as it is possible, some are waiting until birth to "be surprised." (I put this in quotes because it's always a surprise when you find out, whether at 20 weeks or 40.)

This has led me to ponder whether I want to find out the sex of my (future, this is in NO WAY an announcement) child before he or she is born. A recent Time article has some thoughts on the subject that make me think... especially regarding how knowing the sex sooner can lead you down the road of gender stereotypes earlier. I don't know how much I worry about my own forcing of a gender stereotype on my kids (in fact, I am mostly preoccupied with the idea of using my poor guinea pig offspring to smash said stereotypes), but I do worry about how more traditional members of my family and friend group might head in that direction.

However, all that has gotten me thinking about what sex I want my first child to be. Some days I think that it would be exciting to raise a little feminist. Then some days I think that it would be a bigger, better challenge to raise a male feminist. I think about teaching my future child, male or female, "yes means yes" and what that would look like. I think about teaching a teenage girl about her first period (this in particular lately, since my term paper last semester was on menstruation-- more on that as soon as the semester is over). Sometimes I think about the downsides, too. That a girl would be treated as less by society, as a body for public consumption; that while I tell her "you can be anything you want to be," others will tell her "girls can't do that." That I will tell her she's beautiful on the inside, and others will tell her she's only as good as her cup size and skirt length. Then I think about how boys are never allowed to embrace their sensitive side, to cry in public; that while girls can wear blue basketball shorts, it is not socially acceptable for a boy to wear pink frilly dresses. I think, either way, about how no matter how hard I work to teach my child that gender stereotypes need not define them, the rest of the world will seek to define them by their genitalia anyways.

And then, while musing on this subject the other day, it hit me. It matters very much what sex my future children are, because of matrilineal descent.

As I've said before, I don't know whether I'm nondenominational, or Orthodox, or Conservative, but I don't generally align with Reform Judaism. When Dan and I had the "Jewish babies" conversation, I was very clear that I did not expect or even want him to convert, but that I needed him to commit to raising our children Jewish if we stayed together. I can only speculate, but I don't think we would have gotten married had I insisted on conversion. But I didn't have to-- matrilineal descent is recognized by all varieties of Judaism. There will never be a doubt, anywhere, by anyone, that our children are Jewish.

In pondering my own potential future children, I realized the full weight of the matrilineal descent law. I considered myself free to marry a Catholic, despite my strong desire to pass Judaism to my children, because of matrilineal descent. My daughter would have the same freedom to marry for love without compromising the Jewish identity of her children, but not my son. And that leaves me with a conundrum. I want to raise my children with the same love of and commitment to Judaism that I feel, and above all the desire for continuity-- Jewish grandbabies. I also want to encourage them to find the love of their lives, in whatever form it comes. But for a son, the choice would not be that simple.
Posted by Stephanie at 7:00 AM No comments: