Happy 4th night of Hannukah! Today for lunch I made some traditional Hannukah food... Potato Latkes!  Potato latkes are not for the faint of heart- there's alot of grating and squeezing and standing over a vat of boiling oil. But they are delicious! Recipe is below. First, a menorah and a factoid: 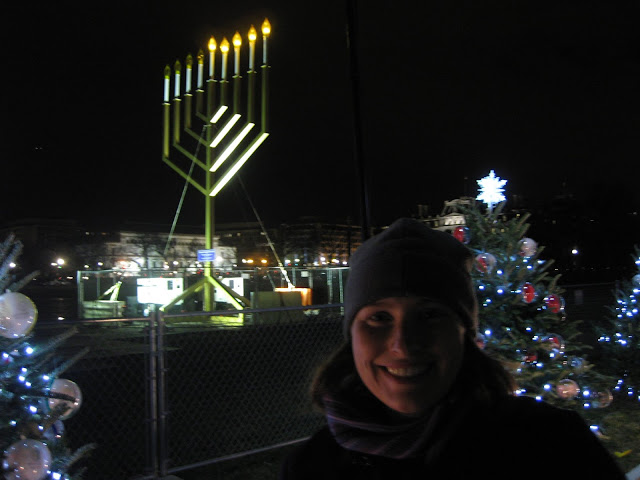 The National Menorah in front of the White House, next to the National Christmas tree. I'm impressed they had the right number of candles lit. Way to go, America!

Q: What kind of food are you supposed to eat on Hannukah?
A: Unlike most Jewish holidays, Hannukah doesn't have any special food restrictions or mandatory foods. We traditionally eat fried foods- potato pancakes (latkes) and/or jelly filled doughnuts (sufganiyot). There's also chocolate money (gelt) that people play Dreidel with or just give as little gifts and, of course, eat!

Funny story- I was given a pet Ball Python for Hannukah one year. Since they have brown spots I named mine Latke. See?

Source- that was in the age before digital cameras so I don't have any pics of my actual Latke. I'll have to collect some old photos from my mom. I used to wear her around my neck.

Ingredients (serves 6):
Baking Potatoes - about 2 lbs, for me that was about 5 small Russet potatoes.
White onion - 1 medium sized, depends how much you like onions
1 egg
1/2 to 1 cup all purpose flour
Salt and pepper
Olive oil

For toppings:
Sour cream
Apple sauce
Whatever you want! 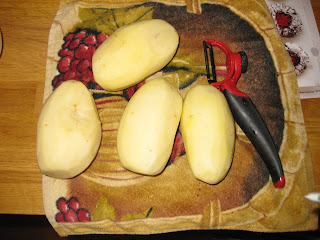 2. Using the small (shredded cheese) side of a grater, grate the potatoes. Then grate the onion on the next size up grater side. Warning: you will cry.  Keep potatoes and onions separate for now. 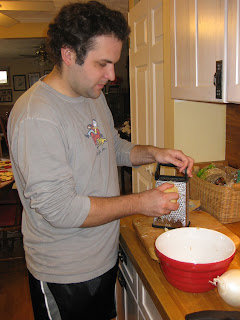 3. The starch starts to leak out of the potato shreds and turn the whole mess pink/purple (do not be alarmed by the bright pinkish color, that goes away when you squeeze). Set it in a strainer to get the starch out. Usually I press it into the sides of the strainer or squeeze small handfuls until they are mostly dry and white in color. This is tedious and will make your hands dry. I try to get as much starch out as possible so the pancakes don't get gluey. 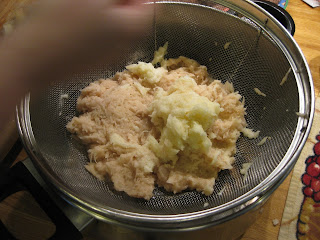 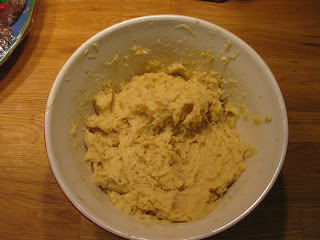 4. Mix the strained potatoes with the onions in a large bowl. Add an egg. Then add flour. The point of the flour is to give it a muffin batter-like consistency, so it depends how much starch you squeezed out as to how much flour you will need. Add salt and pepper.

5. Heat olive oil in a skillet. 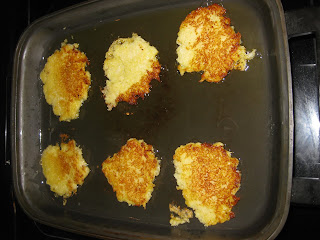 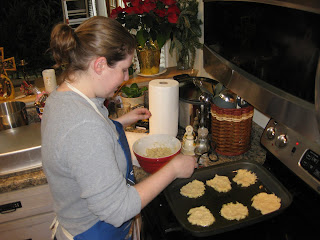 6. Add spoonfuls of the batter to the oil once its around 375 degrees. Use the spoon to flatten the batter into a flat pancake. Now the hard part... resist the urge to flip too soon. I always try to flip them too soon and this makes them kinda soggy (See the ones I flipped too soon?). Leave them alone for about 6 minutes, then test one. They should be a yummy golden brown (like hash browns). Flip and brown the other side, about 5 more minutes.

7. Serve with applesauce or sour cream, if desired.  We had them for lunch with veggie-filled scrambled eggs, so some people even added Tabasco or salsa. I always choose applesauce. Enjoy! 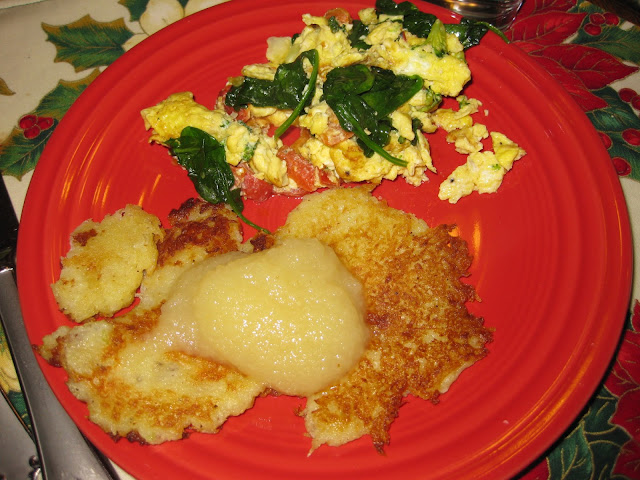 Posted by Stephanie at 6:26 PM