1. Store-Bought Italian Night
We're headed out for Virginia in 2 days so I didn't want to cook something that would yield too many leftovers. I opted for frozen chicken raviolis that have been in my freezer for awhile. To use up an onion and bell pepper I chopped them up and added some to a jar of tomato sauce to saute. Then I added the rest to a bag of spinach with some Italian salad dressing. For an almost-entirely prefab meal, it was quite delicious. 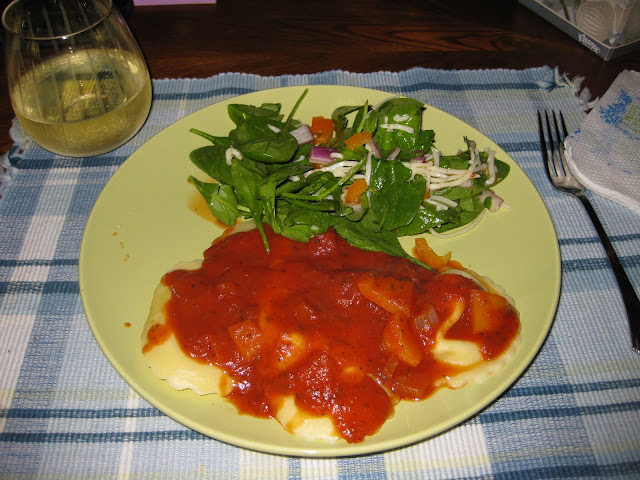 2. Thanks to my awesome boyfriend who helped me rewire a switch to my front lights.
I had a timer installed and it apparently chose to die TODAY. I don't feel so good about going away for several days without front lights (just makes the house that much more vulnerable) so we put the original switch back on. I'll have to put a new timer on next week. This is the second timer to die in that same location and I've only had the house for a year and a half. Weird.

3. I am preparing a Hannukah series for the next 8 days (Hannukah starts tomorrow night). Do you have any questions about Hannukah or Jewish stuff that you've always wanted to ask? I'd love to answer them. Don't be shy.

Posted by Stephanie at 8:08 PM