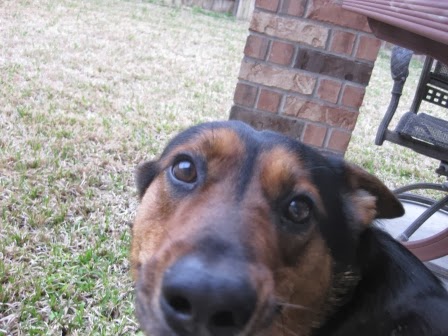 He came with a different name, but he didn't seem to know it, so we renamed him Raider. As in... (Source) Cylon Raiders from Battlestar Galactica. We don't call it Nerds in Love for nothing! When I suggested "Raider" as a name, Dan said "As in 'Cylon Raider?'" He knows me. :-)
Dan and I adopted Raider last week. We had been talking about getting a dog for awhile. We almost did in November, but we had a week-long trip for Christmas already planned and I worried about boarding a dog for so long when he was so new to us. Finally the weekend before last we went to the Houston Humane Society shelter to pick out a new best friend. 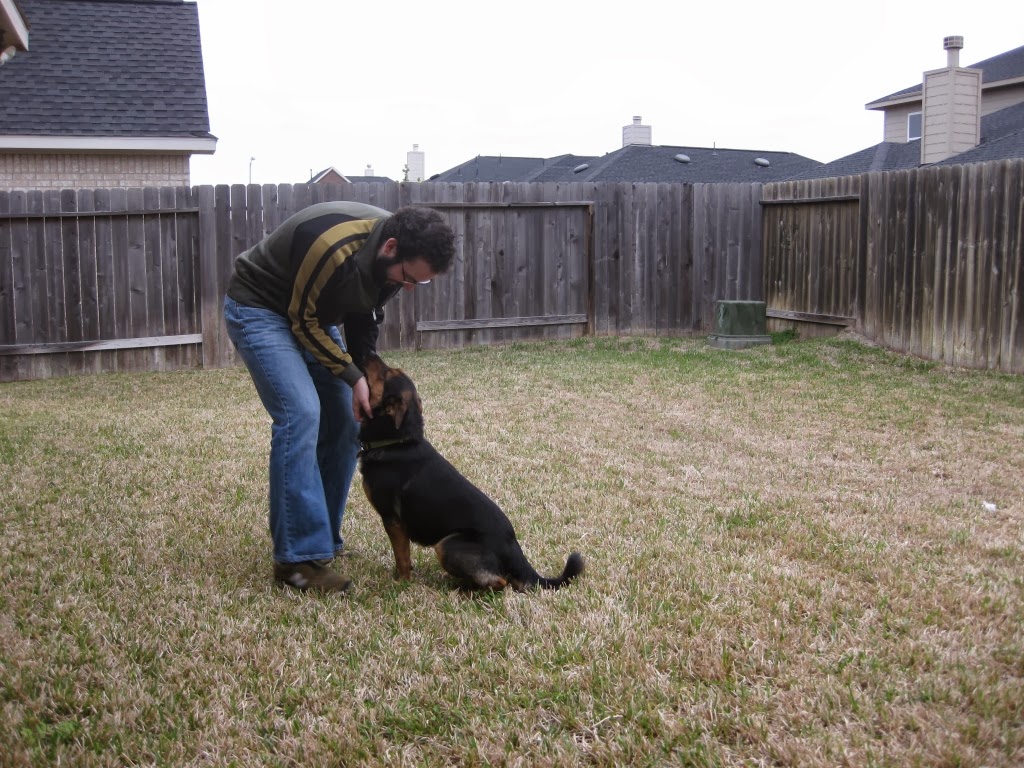 We looked at an Australian Shepherd first, but this little guy stole our hearts. He was surrendered by his owners at the beginning of February, but they didn't give a reason. It was obviously not because he was a bad dog though. He's the sweetest!
He's definitely part German Shepherd, but only 43 pounds which is about half the size of a typical German Shepherd (he's 2 years old, so fully grown). I think that's good though, he's a good size! His body proportions seem a bit off, so we think the other half is Corgi... long body, short legs, big ears.
We took him home Thursday after he got neutered and some shots and he took to the house pretty quickly. He's housebroken, sits on command, and seems to do fine with the crate (took some coaxing to get in the first time, but now he'll lay in there of his own accord when he wants a break). The only bad habit he seems to have is jumping up on people, but he'll get there. 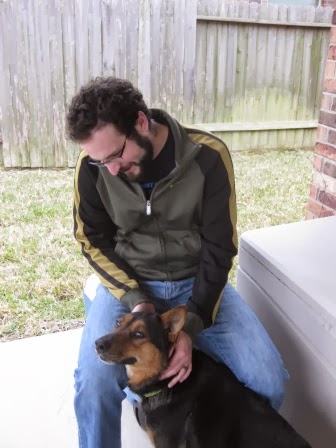 Raider's likes: Food. All kinds of food. Will do anything you ask, for a treat. Snuggling. Making friends with other dogs. (He doesn't bark, just sniffs.)
Raider's dislikes: Toys. He will eat the treats out of his Kong but then immediately abandons it. And we bought him a plushy squeaky thing but he literally hides behind us/things to get away from it. He also doesn't seem to enjoy when other dogs bark at him. He's a lover not a fighter, I guess. 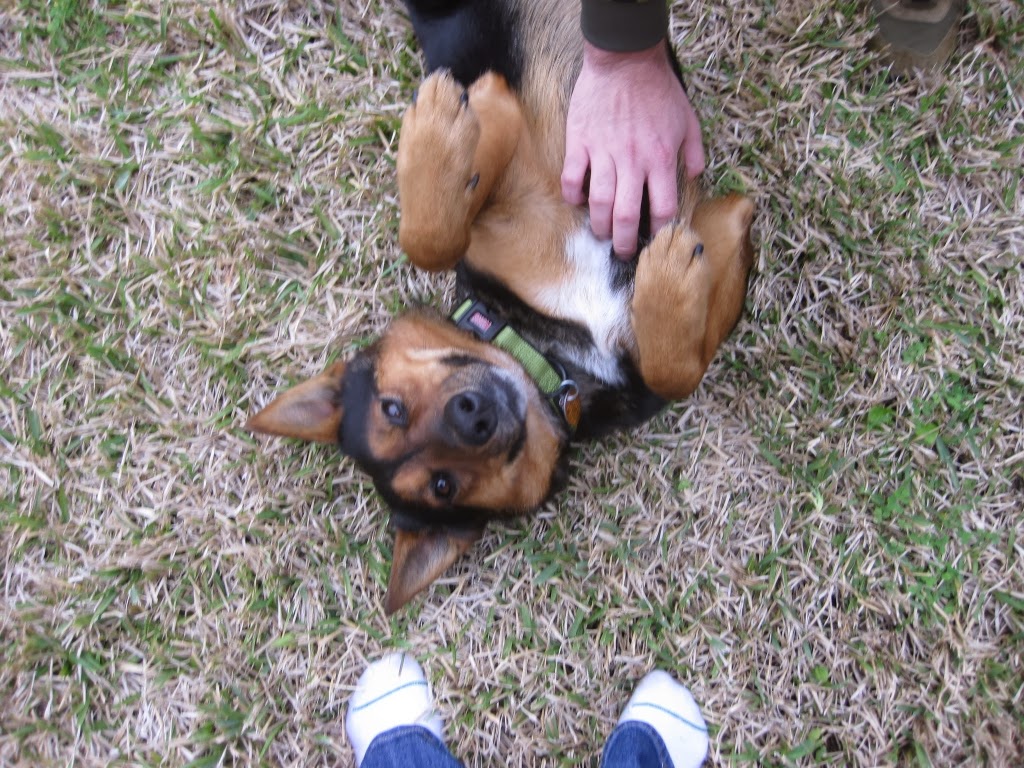 Welcome to the family, Raider!
Posted by Stephanie at 8:00 AM 1 comment:

Previously, the race story and our stats. Now, overall race impressions and the rest of the Austin trip.

We had planned to leave around 10am on Saturday morning, arrive in the early afternoon and enjoy a leisurely day in Austin. But on Friday night we got a frantic text from a college friend of Dan's who lives in Washington D.C. and was also running the race. Due to all the winter weather they were having, her flight to Austin was cancelled! They couldn't get her into Austin at all until Monday; instead they were suggesting she fly through Houston to San Antonio and then drive the almost-3 hours to Austin. We had no agenda, so we figured we'd wait for her. Her flight was all ready to go... and then ended up sitting on the tarmac for another hour due to technical difficulties. Finally she landed around noon; we were watching her flight status and swung by the airport to get her on the way out of town.

Our next stop was Kreuz Market in Lockhart, TX. Lockhart is central Texas BBQ country, and this place is Dan's favorite. We had planned to stop for lunch on our way to Austin, so we made it a late lunch. We ended up waiting almost an hour in line before getting our food at 3pm on a Saturday! You order direct from the smoker, meat by the pound. We ordered a huge pile of brisket, plus some sausage for those pork-eaters!
Their rules are: no sauce and no forks (eat with your hands). The fat from the brisket is really all the sauce you need. It was delicious! After that, we drove the last hour to Austin. When we arrived, the expo was closing in about 90 minutes so we headed straight there. Which brings me to my first gripe about the race: Expo traffic disorganization!
I think they must know it too, since I heard they were allowing race day packet pickup which was not previously planned. We arrived to a long line of cars waiting to turn into this narrow, winding, single-lane driveway to the parking garage entrance. There was a couple cops directing pedestrian traffic across the driveway, but nobody directing cars into the driveway: it was a free-for-all between people turning in left, people turning in right, and oncoming traffic trying to get through a very backed-up light and people trying to get out of the garage the same way. Also we found out later there was a much less crowded back entrance to the garage, but no people or signs telling you to go there. Terrible traffic handling. We finally parked with about a half hour of expo time left, grabbed our packets, picked up a couple freebies (most of the booths were packing up) and then finally drove off to our hotel to check in.

Race compliment number 1: The hotel was delightful.
We stayed at the Radisson, an older building that had recently been renovated. They had a lovely pool (although we didn't bring our suits, oops!) and backed up onto the Colorado River, with a private entrance to the path that goes along the river. Parking was included in our discounted race price (saved us $12 a night for self parking) and it was easy walking distance to the start line, easy stumbling distance home! Sadly our air conditioner was broken the first night, it only blew hot air no matter how much we turned it down. But I called the desk about it and they fixed it right away, which is the best you can hope for.

Race gripe number 2: I alluded to this in my previous posts, but they definitely needed more bathrooms on the course. There was actually a huge bank of probably 15 around mile 2, but after that it thinned out a lot. I don't think anyone really has to pee by mile 2, they should have conserved those port-o-potties for the later miles!

Race compliment number 2: The food trucks. I covered all our delicious eats last post. Suffice it to say, I wish every race would end with a few food trucks!
Overall I would definitely consider running this race again: Austin is a fun city and it's close to home. The finish chute and food trucks were done well, as was traffic control on the day of the race... but those bathrooms man! Nine whole minutes. Kills me.

After the race, we hobbled home, showered, and napped a little. Then we went out for a walk along the river. We turned north after that and wandered around the city until we found a wine bar to sit at. The weather was clear skies with a cool breeze, so we drank our wine outside. 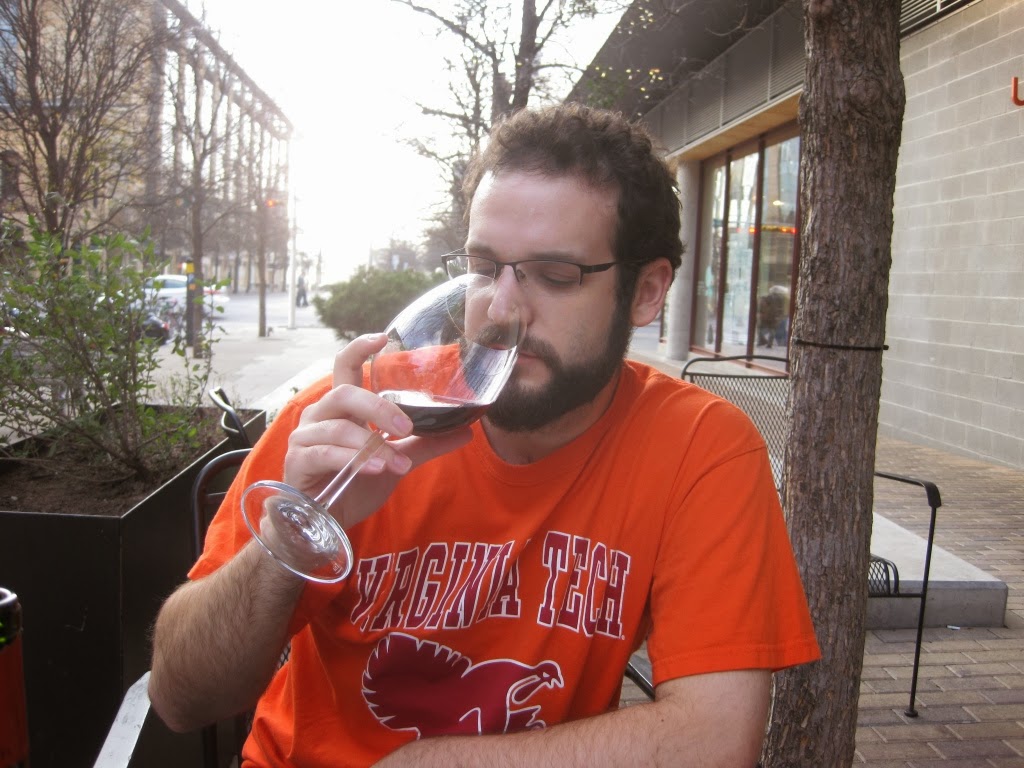 After that, I had a craving for chocolate so we stopped in a yogurt shop on the way back for me to get a chocolate chip cookie and froyo sandwich. Randomly the shop had this remote control mosaic on the wall so I snapped a pic. 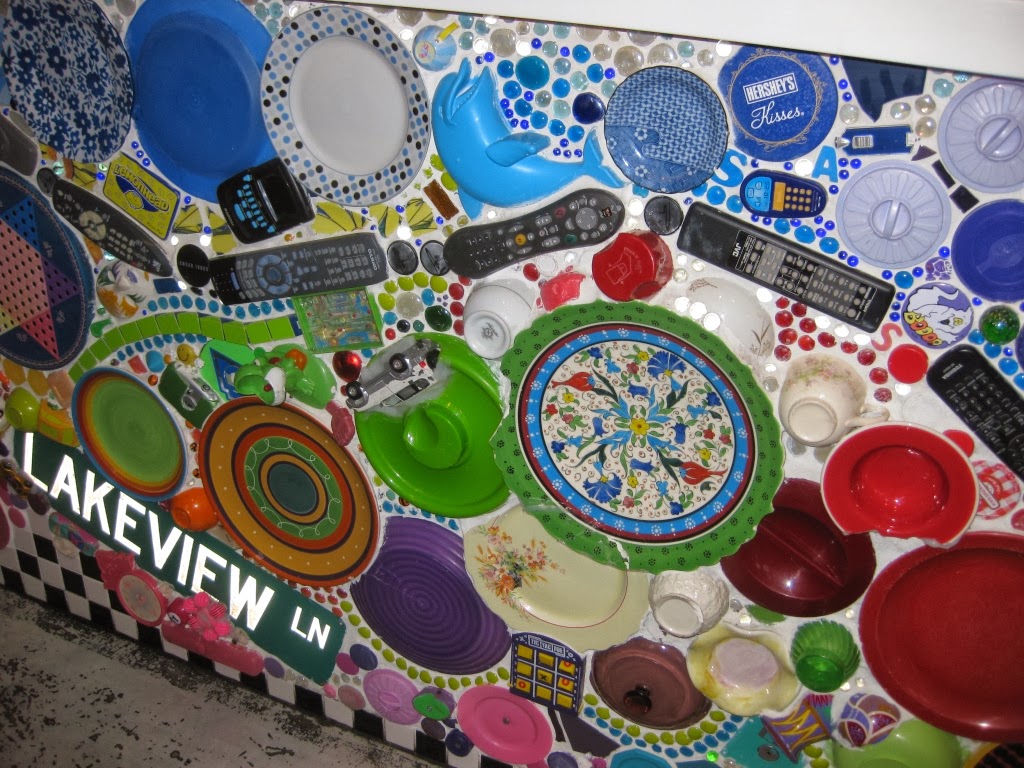 We ate dinner at an Austin institution, a food truck turned stationary restaurant: Torchy's Tacos. No pics, you'll just have to imagine how tasty it looked. (Very, very tasty.)
Our original plan was to explore a little more on President's Day Monday before heading back, but I had to go on the overnight shift Monday night, so we got up on the early side Monday, had breakfast at Jo's Coffee Shop (random and cool: they have a projector TV and they show the Walking Dead live on Sunday nights) and then drove back.
Posted by Stephanie at 8:00 AM No comments: