Been a busy week of wedding prep.
On Saturday my parents came to town to help. I went to work on Sunday while they went to Sam's to buy all kinds of goodies. 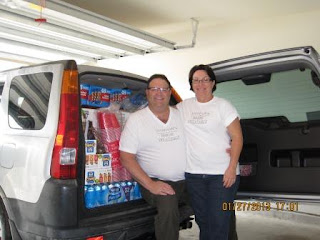 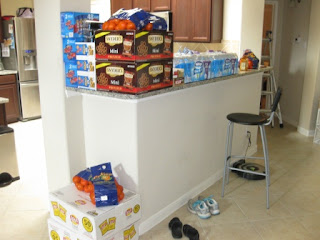 Monday we packed the welcome bags for our hotel guests (127 of our 162 guests are coming from out of town, so there were A LOT of bags!). 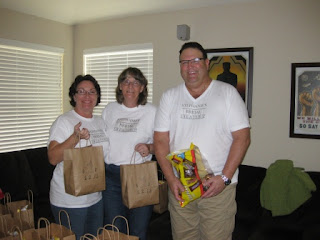 I worked my sweatshop slaves to the bone! 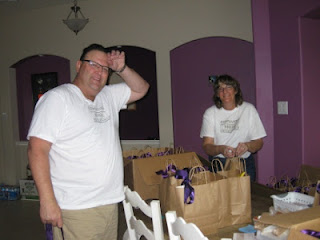 See me kicking back in the background? I was actually writing the welcome letter. 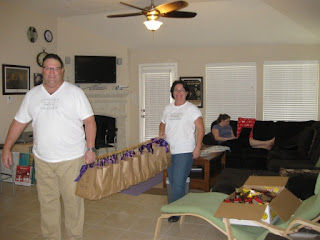 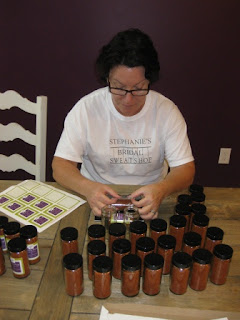 And Dad tied 100 perfect little bows. Mom and I helped, but we don't have surgeon hands. 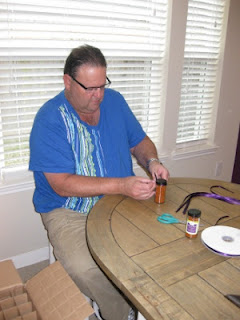 Tomorrow morning we are driving up to the hotel by the venue and Saturday is the big day! I'll be back next week to share more wedding pics. See you then!

Posted by Stephanie at 6:22 PM 2 comments: Links to this post

We're getting married in 2 weeks! Things have been busy. In the last month or so, we...

Washed 96 glass bottles (thank goodness for dishwashers) and filled them with homemade spice rub. The labels were ordered online from labelsonthefly.com. They came out so good and didn't even take a week to arrive! 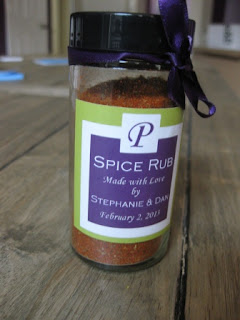 The majority of the spices we bought in giant bottles from Sam's Club, but a few we had to special order from Amazon.We mixed up batches in a big bowl and funneled into the bottles. 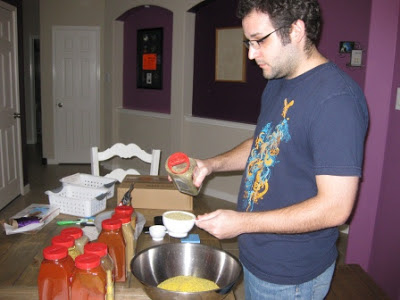 We also hit up Hobby Lobby for some random supplies, including stamps for decorating our welcome bags. It took us about 3 hours to stamp the 70 bags which I ordered online from nashvillewraps.com. 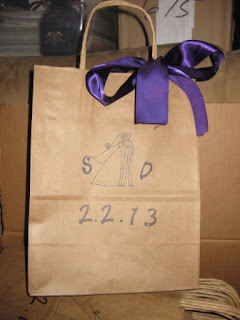 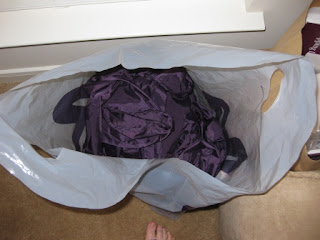 And I did a bunch of not-very-photogenic paperwork- songs list, ceremony composition and worked on the program. While home for Ali's wedding I picked up my dress and brought it back in a carry-on. And remember, I cleaned out the bedroom for Dan's stuff! Whew.

Here's an almanac weather report for our wedding day: 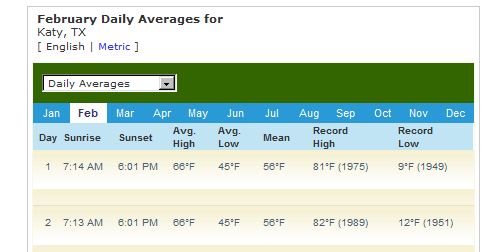 Yup, record high of 81, record low of 12 on the same day.  Is a perfect, average, 66 degrees too much to ask for? Probably. Only 3 more days and then I can start hawking the 10 day out forecast. Fingers crossed for good weather!

What's left on the to do list?
Luckily my parents and Dan's parents are all coming next Saturday to help finish up these things and help me move it all to the hotel by the venue.
Posted by Stephanie at 5:19 PM 1 comment: Links to this post

Last weekend Dan and I were in Fort Lauderdale for my bff Ali's wedding! I was a bridesmaid in her wedding, and I couldn't help thinking about how 3 weeks later the roles will be reversed in my wedding. Eeek!

Photos from the day: 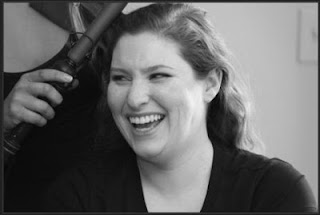 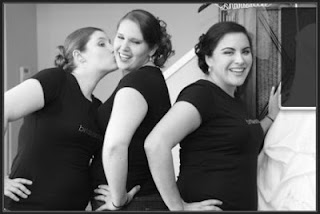 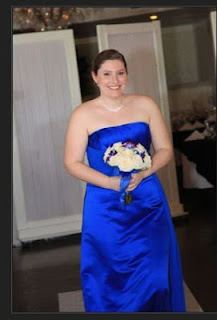 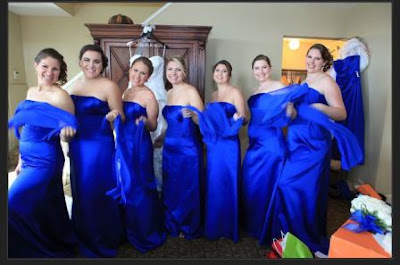 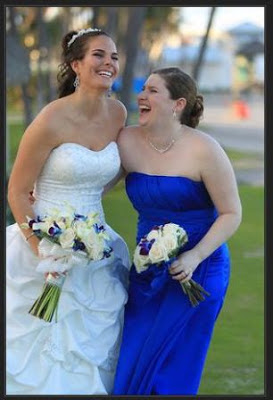 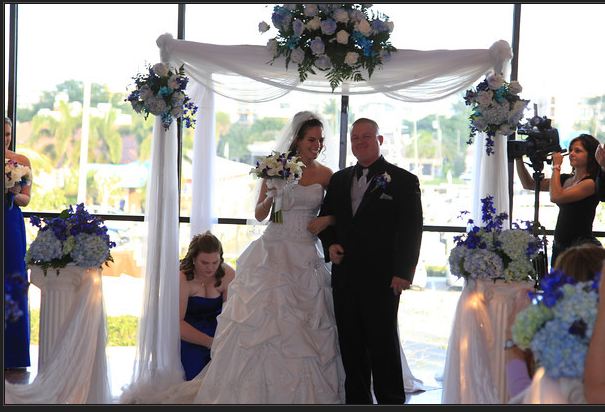 To the bride and groom! Congrats!
Pictures from Ron Wood Photography.
Posted by Stephanie at 7:00 AM No comments: Links to this post

[Recently a friend of mine had something stolen from her, under some shady circumstances. She got it back, thank goodness. She inspired me to write this. People like to say "I know how you feel" when bad things happen to you. But they don't know. Here's how it feels:]

Almost 4 years ago...
I got home late from work, around 6pm. I put my key in the lock and turned it, but I noticed the usually sticky tumbler didn't turn. The door was already unlocked.
Huh, I thought, I am usually so good about locking the door. But I had left early that morning and was studying for a big test at work. Maybe I just forgot. So I went inside.
The next thing I noticed was that the hall light was on. Odd, I didn't remember doing that either.
And then I looked at the table where I kept my laptop. Gone. And my TV? Gone.

I turned to look at the doorjamb. It was splintered. Later I saw the tool marks- my door had been pried open with a crowbar.

Now in a state of panic I ran back to my car and locked the doors. I remember it being so hot, that between crying and sweating I was just a dripping mess-- perhaps you know the kind, where your entire face feels like it's melting off?
I called 911. It took forever for the police cruiser to arrive (forever, or maybe 15 minutes).

They took my statement, dusted for fingerprints. They saw a photo of my boyfriend on the shelf and asked many pointed questions about whether he might have done it. (He didn't. Yes, I'm sure.) An officer waited while I packed some clothes and headed for a friends house. The frame was too broken for me to lock the door. But that didn't matter, there wasn't anything left to steal. I am so grateful to my friend who took me for a few nights. Not that I slept much, of course.

A place I thought was safe was no longer safe. No place would ever be safe again. The next day, I had to go back. I had not packed more than one day's worth of clothes the night before, in fact I had forgotten underwear completely.  I brought a friend from work with me, so I didn't have to go alone.
I moved out only a week later (I payed two sets of rent for two months until my lease at the old place was up- they refused to let me out early), I never slept another night alone in that apartment.

Though it had happened in broad daylight, I became afraid of the dark. I still do not go outside very often after dark when I'm home alone. When I get home late at night, I pull my car into the garage and close the garage door before getting out of my car. Nobody said fear was rational.

I got an alarm system installed- first at my next apartment and now in my house- but when I go on vacation I always worry about my house. Will the alarm function if the power goes out? Might someone beat the monitoring system and get in undetected? Will I come home again to find the doorjamb shattered, the TV removed from the mantle?

I haven't gone to bed alone a single night since then without thinking about what I would do if someone broke into my house that night. Never without imagining whether the alarm would wake me with time to get away... whether I would remember to grab my phone when I ran, so I can call for help? Where would I run? This closet? That one? The far side of the bed? Could I get to the gun in time? Would they run away when the alarm siren went off, or would they venture inside? Would the police come in time? Will they hurt me? I imagine different scenarios, different game plans every time.

What was taken from me that day? Many things. Most of them were replaced by my insurance. But my last safe place was taken too. I will never get that back.
Posted by Stephanie at 8:00 AM No comments: Links to this post

Most Productive Sunday EVER

Whew. I was going nonstop for several hours today. I worked up a sweat and an appetite. One major thing on the Wedding To-Do list was not about the wedding necessarily. But as you may know, Dan and I each own 3 bedroom houses. And having a 3 bedroom house gave me plenty of places to hide my crap. I had a closet just for shoes and handbags, ok? (Mind you, most of them were 6+ years old and hadn't seen the light of day in about 4 years... but I had them!)

But all of that changes on February 3rd, when my husband is going to start living here. [I still don't have enough room for all his stuff- betwen us we own 3 beds, 1 pull out couch, and 1 futon (which if you're doing the math is at least 2 beds too many for either house). Both of us have more downsizing in our future.]

But as I type this, there is now enough room in the closets and drawers for him to move his clothes over. I sure wish I had thought to take "before pictures" but you'll just have to trust me that I used to have a lot less empty space. 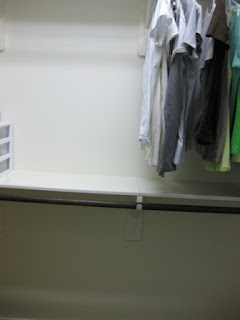 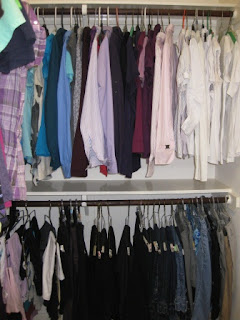 There's actually a third section too, where my fancy clothes and ski clothes are shoved in the corner, with more room for Dan's stuff. Isn't it obvious I bought the house for the closets? (Actually, it was the kitchen, the closet was a bonus!) 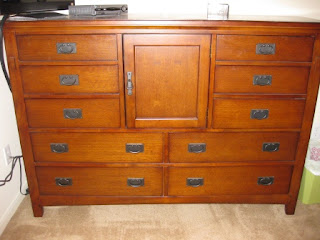 Here's my drawers. They were all full this morning but now the right side are all empty!


Where did it all go?  Well here's the stuff to donate: 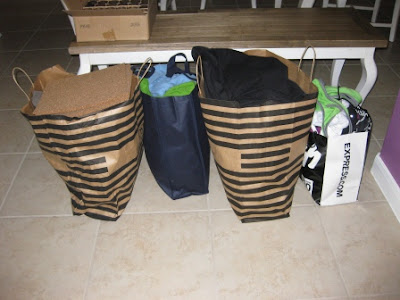 And there's more in the trash. I don't know why I save clothes with pit stains and holes. I found a pair of jeans in my closet that was once dark wash that looked almost white now. Why why why didn't I throw them out 4 years ago? "Just in case." Anyone else have this problem?

Then I tackled the "wedding room." We have gotten a lot of gifts, and though I'm on top of my thank you notes, I was just stashing the boxes in my spare bedroom. I put away everything I could and broke down all the boxes. 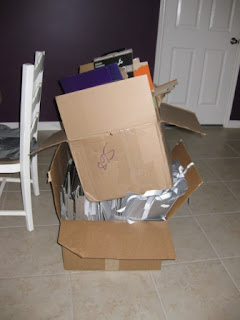 Yes, this is two boxes full of broken down boxes. A shame the recycling went out yesterday and won't go out again for 2 weeks! There is more that I don't have space for yet (first world problems, huh?) so I put it in the guest bedroom closet: 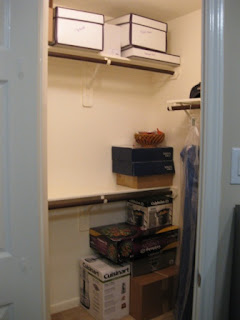 The final result? This room, which I couldn't get more than 3 steps into yesterday, is almost totally empty: 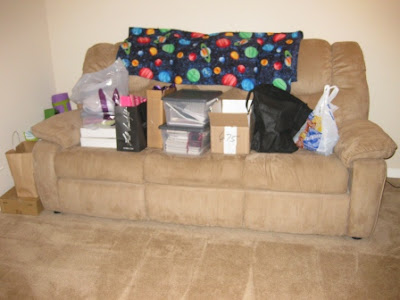 Everything that's left is wedding day stuff- my accessories, wedding party gifts, some other odds and ends.  It had to be emptied because the week before the wedding I am hosting all 4 parents (my mom and dad, Dan's mom and dad) in my house. That couch is a pull out queen, and now I can actually pull it out for someone to sleep on! Hooray!

And then, if that wasn't enough for one day... we are heading out of town on Thursday to go home for my bff Ali's wedding. Friday morning is my second wedding dress fitting, and then Saturday is her wedding. So I did laundry and packed most of my stuff for that. I am feeling so accomplished and ready to settle on the couch with a glass of wine.
Posted by Stephanie at 7:10 PM 2 comments: Links to this post