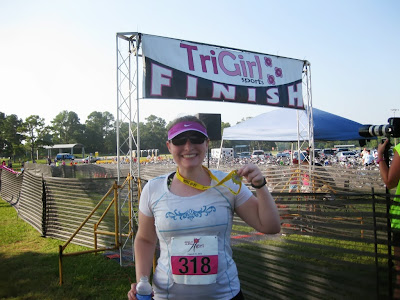 First alarm: 4am. Second alarm: 4:02. Third alarm: 4:05. The first alarm woke me, but I laid there until the third alarm. "Terrible idea. Who gets up at 4am?" I thought to myself, before realizing that this won't be the last time I see 4am this week. (I start the night shift on Friday.) Then I hopped up and turned on every light in the house. 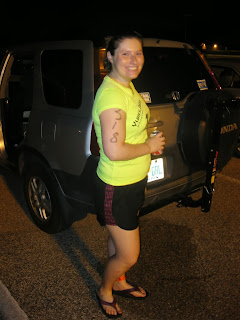 Since it was my first tri, I wanted to get there early. We ended up arriving before the park opened. Luckily there were a couple other people also waiting outside the gate with bike racks, or we might have thought we were in the wrong place. Transition was even more confusing in the dark, but I managed to rack my bike (it's so short that the front wheel didn't even reach the ground when racked, which made it a little complicated to get un-racked) and set up my stuff.
Then I got to a pitch black (what you don't know CAN hurt you) port-o-potty before the line started. By 6:15 there was a huge line for getting marked, so I'm glad we got there early. Hubs and I milled about until the festivities started with a prayer (surprisingly non-denominational, for Texas) and the national anthem a little before 7, then headed to the water to watch the wave starts.
300* yd Swim
They did wave start by age group, starting with the 30-34 ladies and ending with the 20-29 so I had to wait until about 7:20 for our turn. We're having a little cold snap (for Houston, for August, anyways) so I was a little chilly before the start (it was about 68 degrees... I'm such a wimp, I know) and worried that the water would be cold. Nope. The water was magnificently warm, even warmer than being out in the air. 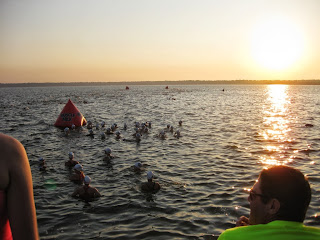 We got into the water and stood on a little sandbar, then they started us with a horn. I was a little disoriented when people around me took off , but I rallied, scooted toward the outside (yes that means more distance to swim, but less chance of being kicked in the head) and started out. There was a pretty strong diagonal current dragging us back toward shore. I felt like I'd take a couple strokes and barely get anywhere. So I did some doggy paddling and some sidestroke to catch my breath. I'm surprised I came in 17th of 40 in my age group for the swim, which was my highest place of the day, since I would have pegged it as my worst of the three sports. 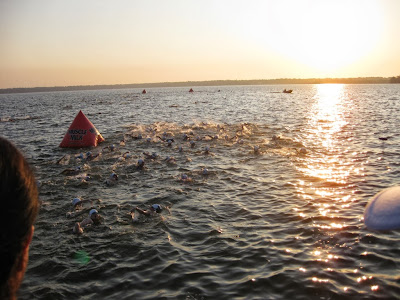 *There's a discussion on the race's facebook page- the race director confirmed that swims were about 2 mins slower than usual across the board, and speculating that buoys may have moved due to the current. A few people with waterproof Garmins say they were reading over 400 yards rather than the expected 300. I can't be sure, but it definitely felt like a long way!
Time: 11:24 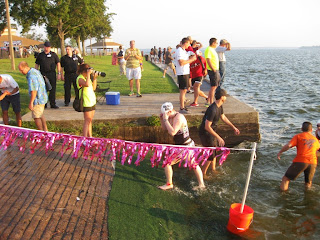 T1
I knew this was going to be my long transition and I decided not to rush too much and screw something else (a DQ would really ruin my day!). I did run from the water to the transition. Then I threw down my beach towel and took a seat. Whatever. I wiped off my grassy, dirty, wet, gravely feet and pulled my capris up to my knees. Then I put on my socks and shoes, stood up, hoisted up my pants to my waist, got my sunglasses and helmet on, and headed off.
Time: 2:45 (actually, I was expecting like 4 mins, so this isn't bad) 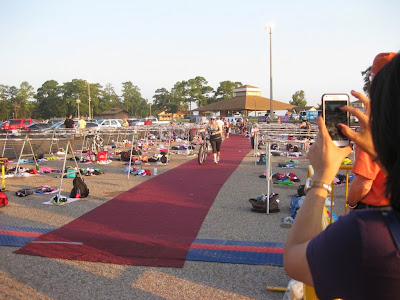 11 mile Bike
I started the bike feeling pretty good, despite the swim being a battle. I passed a few people early on, but got passed plenty on the hills that came later. I felt the burn for sure on those hills, but overall the bike was pleasant. Based on my training rides I was expecting close to an hour for the bike, so I'm pretty proud of my time even if I did come in 30th out of 40 in my age group.
Time: 46:16 (avg speed 14.3 mph) 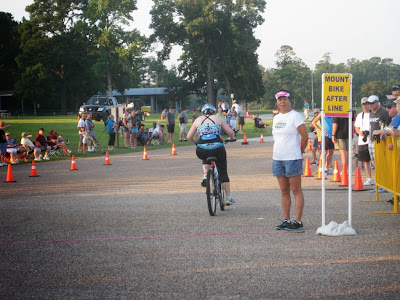 T2
I didn't have that much to do, but it was much harder to rack up my poor, short bike with all the others around me. I wasn't changing shoes (no clips for me) so I just had to drop my helmet and my (thankfully unused) spare tube. Then I grabbed my shirt and hat and walked out of transition while putting them on. I also grabbed a gatorade from the water stop that was right at the transition exit and drank it before running.
Time: 1:23 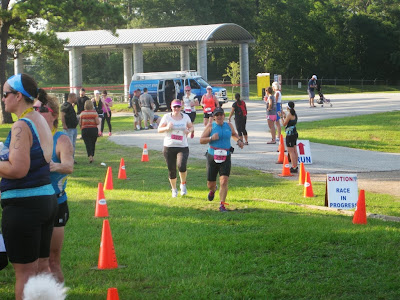 3 mile Run
Whew, almost there! As I exited transition and saw that I was just reaching an hour, I realized 1:45 (which I thought was my pipe dream goal) was well within my grasp, which I was pretty excited about. So I headed off on what I hoped was a steady pace (I decided to forego putting on my non-waterproof Garmin in transition and just used a regular sports watch, so I didn't know distance or pace all day). The run was lovely- half pavement, half trail, mostly shade. I train at a 13:20 pace on the treadmill (4.5 mph) but I already noticed in my bricks that the numb biker butt makes me run faster than usual and then I get tired out because I can't sustain that pace. I think I did a good job of trotting along at a pace slightly faster than training, and when I saw the finish line I still had enough juice to pull out a pretty decent sprint.
Time: 37:14 (12:25 pace)

Total time: 1:39:03. 35th overall in my age group, 295 of 400-something overall.
Thoughts: I loved the tri. I didn't love the swim, but I did enjoy being wet and cool for the rest of it. I loved the bike, I loved the run, I loved being out there with everyone (people were friendly, helpful, and encouraging all day long, which was great). I also really love training for a tri- training for a running-only race gets a little dull. I don't think I can get another tri done this season, but you can be sure I'll be back next summer!

Finally, a huge thank you to my husband for getting up at 4am with me, loading and unloading my hefty bike from the bike rack, holding my crap, taking all these pictures, cheering for me, and being right there when I came back from each leg and giving me a reason to smile.
Posted by Stephanie at 8:00 AM