Hey folks, I'm back! Boyfriend and I headed to Virginia Thursday night for his little sister's wedding, and just got back.  We missed a heck of a storm in Houston, but both houses look ok. Thank goodness!

Wedding weekend was just incredible. My boyfriend has a huge family, but it is full of awesome people. Thursday night we landed late but had a drink with his brother and sister-in-law in the kitchen before turning in. Friday was a wedding prep day and we helped out where we could before heading off to the rehearsal and dinner. This was followed up with drinks at the hotel bar and then more drinks at a bar down the street, with the younger crowd of relatives (cousins/siblings in their 20's). It was awesome, the family is so welcoming to me and so sweet and fun. And around 11pm I realized I had taken absolutely NO pics for the blog. Sorry blog readers for letting you down, but sometimes life is too amazing to stop for photos... this was one of those times.

Saturday we took it easy before the ceremony at 2, then had a little party in our hotel room (including some bourbon my dad bought at Thanksgiving and some beer we chilled in the bathroom sink) before heading down to the reception.  Again it was pretty awesome, and I snapped exactly 2 pictures: 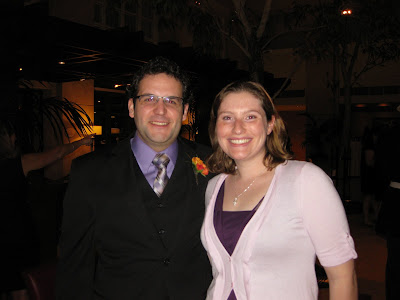 Me and Dan at the reception. 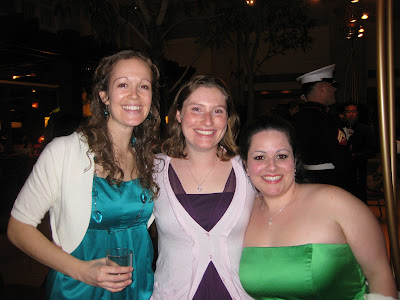 The girls: on the left is Dan's awesome sister-in-law Chelsea and on the right is Dan's cousin Mary.

Its funny that we're arranged in height order, this was not intentional. Mary was one of the bridesmaids so you can see the gorgeous kelly green color the bride picked out. Mary happens to be one of the very few people (3, in my entire life) that I clicked with immediately. Its sad she lives in Ohio because if I saw her on a regular basis I know we would be BFFs. Actually, I kinda already consider her one of my best friends and we've only seen each other twice. Sometimes, you just know!

As for week 5 of training. Well it went alright.  We left off halfway through week 4.

I am happy to report that we did our 5 mile run on New Years Eve to make it 50 miles for December! That was exciting for me. My highest mileage month ever.

Monday- 4 mile run.
Tuesday- Yoga. Definitely felt it afterwards, having not done yoga for 2 weeks. Can't let that keep happening!
Wednesday- 4 mile speedwork. Speedwork is kinda fun, in a self-torture kind of way.
Thursday- Rest. And travel to Virginia.
Friday- Rest and wedding prep.
Saturday- Oops. Was supposed to be a 6 mile run (which would have been a PDR for me) but after a late night of drinking, we couldn't muster the energy. To be honest I wasn't too keen on running 6 miles and then traipsing around in heels until all hours of the night. And I'm a little glad, because my poor legs had had enough by the end of the night.
Sunday- After an even later night of heavier drinking, we were again in no shape to run. Actually we were hardly in a shape to walk, and spent most of the day nauseous, exhausted, and unhappy. I definitely exclaimed "I'm never drinking again!" I don't drink to excess often, and it was a special occasion, but even so, I went overboard.

I'll leave you with one random note. My shoes: 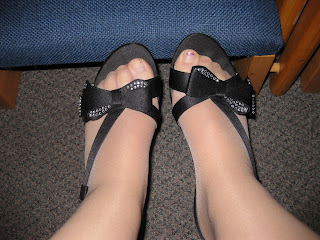 I went to DSW for unrelated shoes (sensible, comfortable work shoes) and saw these from 3 rows over. I ran to them, in a comical fashion. Before I got there I had already decided that no matter how uncomfortable, and whether or not they had my size, and despite having nothing I planned to wear them to, I would have them. They are actually decently comfortable (it takes a good few hours of dancing/walking/standing for my feet to cry). But the bows! (Not pictured are the 3 inch heels)  I don't have a shoe problem, I've got it under control. Has this ever happened to you? Just me then? Sparkly bows, guys, that's where its at.
Posted by Stephanie at 9:46 PM