Monday night I made Janetha's (of Meals and Moves) Turkey and Spinach Meatloaves. I was afraid of flaxseed but gave it a shot anyways. I'm not sure if I should still be afraid of flaxseed, because it smells terrible but the meatloaf tasted delicious. Whether that's because flaxseed is yummy or because you can't taste the flaxseed, I don't know. Anyone have a good recipe that uses flaxseed for me to try to overcome my fear?

Next time I make these muffins I'm going to use kale instead of spinach because I'm also afraid of kale. Its funny, some people are afraid of foods full of fat. Not me though, I'm afraid of healthy food. I always have to trick myself by making my healthy food taste fattening (aka delicious)...

...Like the accompaniment to the meatloaf muffins. Inspired by Janetha, I also wanted green beans. But I hate steamed, boring green beans. As a kid I would only eat those if they were doused in Molly McButter, a powdered butter substance that I have never actually seen in a grocery store (probably passed it a million times and didn't notice) but that my mom always kept in stock. It was delicious, don't get me wrong.

But I don't have any "Molly Mick," as we used to call it, so I needed something different for my veggies.

I started with fresh green beans, and painstakingly snapped the end off every single one. Then I put those in a saucepan with a cup of water for 10 minutes- with a lid, to steam. Some of the water was still left, but I don't like mushy veggies so I drained the remaining water. If you like your beans softer, I would suggest 15-20 mins of steaming. In went 1 Tbsp of olive oil, two garlic cloves, and a liberal sprinkling of ground red pepper. These I sauteed for another 10 minutes or so, until the garlic was browned (be careful it doesn't burn!)  Meanwhile in another little pan, I toasted some almond slivers. 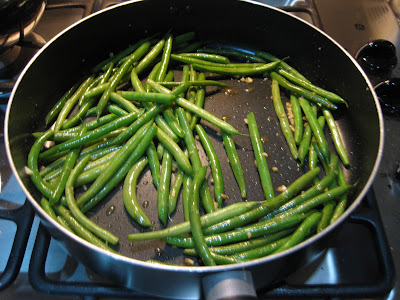 When the beans were done I turned off the heat, dumped in the almonds, and let sit until the muffins were ready. SO Yummy! Highly recommend you check out Janetha's recipe. I don't think it even needs ketchup, as she shows it with. They have enough flavor on their own!  I gave mine a dusting of cumin when I served them. 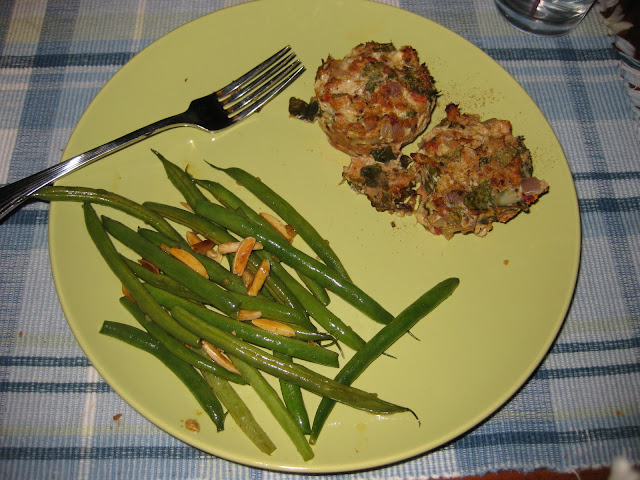 I fed these to my boyfriend, who gave them two thumbs up... and enjoys saying "meat muffin." Then I was eating leftovers for lunch in a meeting (scheduled over lunch, with the invitation to bring your lunch... which I kinda hate when people do that!) and everyone thought they smelled good. I didn't eat one of the muffins so I gave it to a friend in the meeting (also male) who also gave it 2 thumbs up. Definitely keepers!
Posted by Stephanie at 7:30 AM