This weekend the boyfriend and I set out to conquer 6 miles. That's a PDR for me... boyfriend used to run many more in high school, but that's his longest in several years.

Last weekend I lost my weekend to console, having to get up at 5:45 each day to get to work on time. Now I know that's not THAT early... but for a weekend, and considering that your adorable boyfriend is snoozing right there next to you while you have to drag yourself out of bed... yeah, lame!
So this time we kicked off the weekend right by lazing around in bed until 10am. I am reading book 2 of the Hunger Games series, and would have happily laid in bed all day reading it. But we got up, popped some Eggos in the toaster, smeared them with almond butter, and headed out the door. Since its nice out now (75 and overcast today), we don't have to wake up early on weekends to run like we did in the summer.

6 miles is 2 laps around Memorial Park, a park near downtown Houston. This park is in the fancy side of town, and it has a golf course, tennis courts, hike/bike trails, and a gravel 3 mile jogging track. Its a very nice area, usually with ample parking (something I can't say about most of the city), public bathrooms, a few water fountains and some nice tree cover (very important in the summer!). 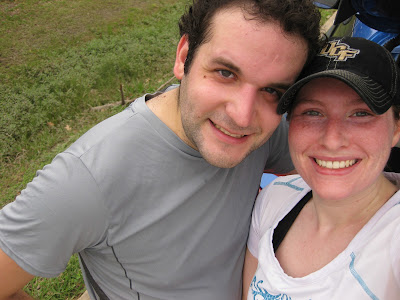 We did it! It's not so obvious in this picture, but my face was tomato red!
Stats: 1 hour and 14 minutes (plus a bathroom break I paused the Garmin for) and 700 calories burned.  Don't worry, I ate them all back. 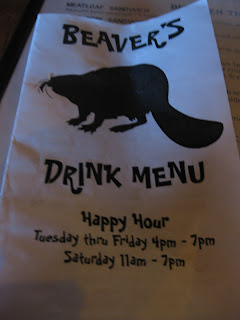 After collecting ourselves and guzzling some water, we headed over to Beavers. This place is interesting, and if you are ever in Houston I definitely suggest you visit! Its in a shack in a pretty old, rundown neighborhood and parking is a nightmare. Don't let that scare you off though! The food is so interesting: part gourmet, part vegetarian, part good ol' Texas barbeque... and all delicious!  Plus it's basically Happy Hour all day Saturday. Sign me up! 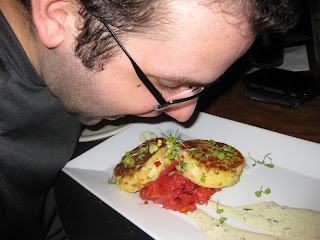 To start we ordered the Beaver Cakes: brown rice and goat cheese patties, pan fried, served with some kinda tartar sauce and house-made kimchi. I'm not a fan of things that smell of cabbage, but my boyfriend dove right in:


I ordered the Beaver Nut Burger. I promise there's a bottom bun under there, but the burger is too big. This burger is made with brown rice, walnuts, and something spicy and delicious. It comes with kettle chips, and I also ordered a side of their coleslaw. They use a vinegar based sauce on the slaw (I HATE mayonnaise coleslaw) and, to be honest, when I decided I wanted to go to Beav's it was the first thing I imagined eating. Yum! 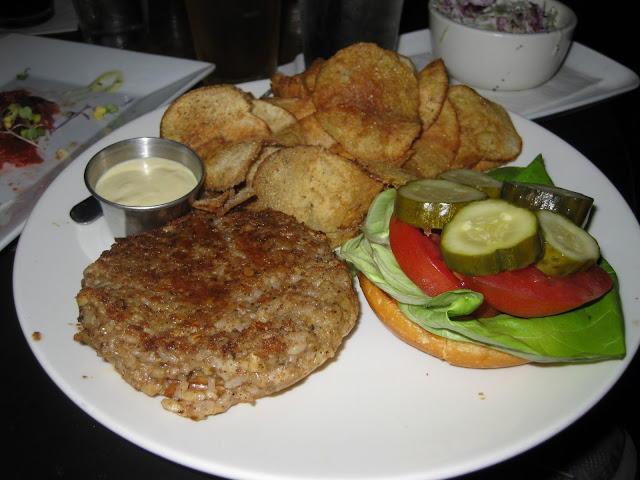 I'm definitely no vegetarian, but this is a very delicious burger!
Boyfriend ordered the smoker sampler- brisket, ribs, sausage, shredded beef, and Texas toast. I stole a little shredded beef to try. (I don't eat pork, or I would have tried that amazing looking sausage for sure!) 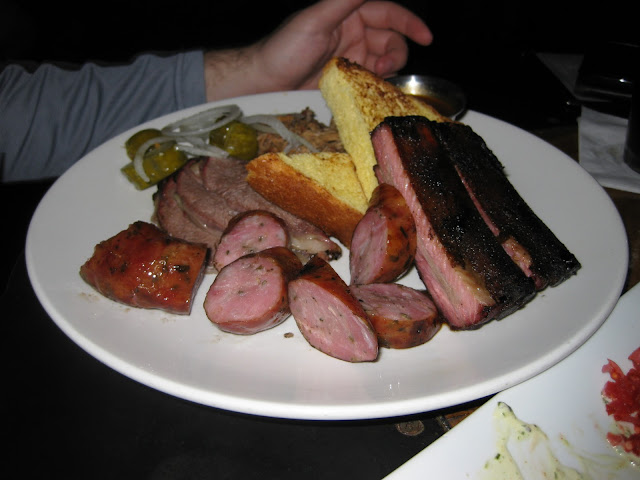 We also got beers, of course, to celebrate. The other cool thing about this place is the large selection of local beers, from a brewery in Houston (St. Arnolds), a brewery north of Houston (Southern Star), and a brewery a couple hours away (Shiner). They have plenty of other beers too, but its nice to drink the locals.
When we got home, my boyfriend took a 2 hour nap on the couch, while I did laundry and read more of Catching Fire. Definitely a good day!

Posted by Stephanie at 8:28 PM