Wow that's a lot of W's. So we left off Saturday morning...
Again no run. I rolled out of bed just in time to shower, grab food, and head off to David's Bridal.

Luckily, Ali had brought a few local bridesmaids to scout it out one weeknight in advance, because the place was packed on Saturday morning.  Must have been 8 brides trying on dresses, with their gown approval posses, plus another bridesmaids group. It would have taken the 8 bridesmaids who attended (of 9 total) forever to try on multiple dresses and make a decision. They already had this one in mind, so we all tried it on, thought it was good, and called it a day. Even so, we were there for over an hour just to do that. We headed over to Chili's for lunch and to celebrate.

That afternoon, a couple of us headed off for a ride on the Intracoastal in Ali's fiance Patrick's boat. We cruised about 20 miles down the intracoastal, from Fort Lauderdale into Miami. I didn't take many pictures because I was afraid of dropping my camera overboard. Here's what I did get:

Sunday morning we finally did go for our 6 mile run. Only the 6 miles turned into the SLOWEST 4 miles ever. It was so hot! We ran the first mile at over 13 min/mile pace, and didn't get much faster; we took a walk break around 2, swung by Publix to use the water fountain, and then dragged ourselves back home. Sweaty. Then we hurried to clean ourselves up for lunch with my grandparents and great grandmother.

I stopped by Ali's house to see her parents, and to say goodbye to my far away friend. Then we had another nap! Then we headed out for another fancy dinner. III Forks is a Texas restaurant that just opened one in Ft Lauderdale. I was telling my parents about how they would have to come the next time they were in Houston, then we saw an ad for the local one and decided to give it a try while we were there.

First my dad saw there was a flight of Macallan scotch so he obviously had to order it. He loves scotch, but I think more than that he wanted to train Dan on the finer points of expensive alcohol.

Mom and I joined in the fun a little bit, by taking a few sips. She likes the smell so she kept sniffing the cups, but I think it both smells and tastes like fire and slow poison. Which it kinda is. The one on the far right, aged in a sherry barrel for 25 years, retails for over $500 for a 750 mL bottle. Dan and I are working on our first homebrew, which has been sitting for 5 weeks and we can't drink it for another week... I can't even imagine aging something for 25 years before getting to try it.


My parents and Dan each ordered the 16oz Ribeye, and we got the cheesy potatoes as a side to share. Also, they give you tomatoes and scallions with your food as a random, but delicious addition. 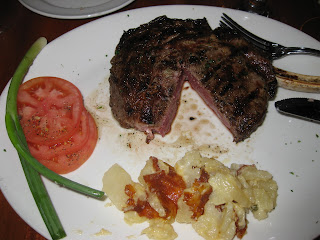 I ordered an 8oz Filet Mignon with blue cheese/garlic crusting and balsamic shallot sauce. It was so good. I love blue cheese! And food, in general. 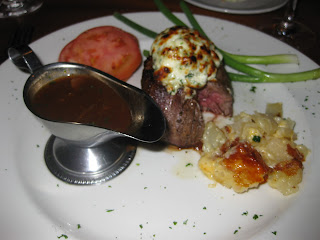 My mom quit, taking almost half her steak home. Dan announced that his entire steak was going down. And then he proceeded to eat the whole thing and chew on the giant meatsicle remains. 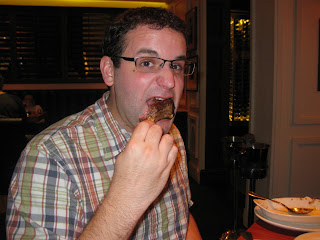 Everyone was feeling toasty and happy from the scotch, so we got my dad and Dan to raise their eyebrows for a picture. Yes, you would not be the first to notice a bit of a resemblance. Dan looks more like my family than I do. 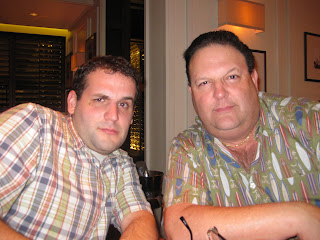 See what I mean? Where did you get that pale girl? 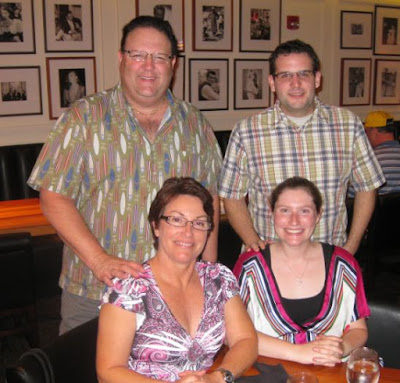 On Monday we had an 11am plane, so we got up, packed, and headed for the airport. My mom was too nice. She went and picked up bagels for breakfast (and sent me home with 2 more for a future breakfast), lox to send me home with, and salami for sandwiches. She packed us lunches and when I busted the bag open I found not just the promised sandwiches, but a bag of chips, and brownies for each of us. Thanks mom! 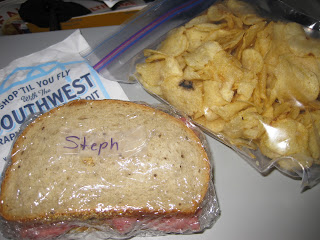 We landed at 1pm, so there was time to grocery shop, do some laundry, and cook some stir fry for dinner... with plenty more left over for lunch! I feel so much better about the work week when I get back from vacation with enough time to prepare.