I'm on another set of overnights- Friday night to Friday morning. Luckily getting off just in time for an early (as in Feb 12th, not as in early bird special) Valentine's Day evening with my boyfriend.

Last week, Monday through Thursday I woke up around 7am, went to work, worked out after (Mon/Wed running with Dan; Tues/Thurs yoga), had dinner, went to bed around 10pm... woke up and did it all over again. Tonight when you are going to bed, imagine if the next day you would just be heading to work at the time you are now crawling into bed.

Truth is, sleep shifting takes time. It can't be done in a day. And I know that I have at least a couple days of misery ahead of me, when the 5am wall comes around. But I also know that with some sleeping pills, caffeine, and all your blogs to read, I'll make it through!

Thursday, after happy hour with some work people, yoga, and a grocery run (I ran out of more things after that monster shopping trip. Oops!) I settled in for a night of sleep shifting:

First, I hung out until I got tired, watching stuff on my DVR. I actually have been trying for the past couple weeks to not watch too many of my recorded shows, knowing that I would need those shows to get me through the night.

After watching some Gossip Girl (guilty pleasure) and One Tree Hill (guiltier pleasure), I set about making Anne's Turkey Veggie Barley Chili. I used chicken stock instead of veggie stock, and tweaked the veggies/spices to my own preferences, but basically followed the recipe. I left it simmering on the stove for awhile, because I prefer my zucchini well-done! 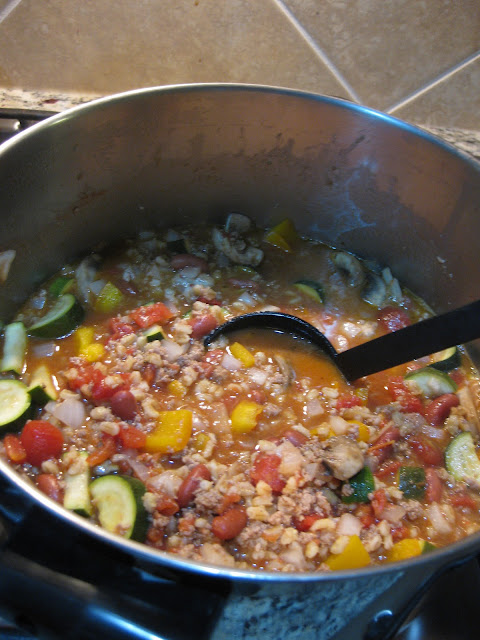 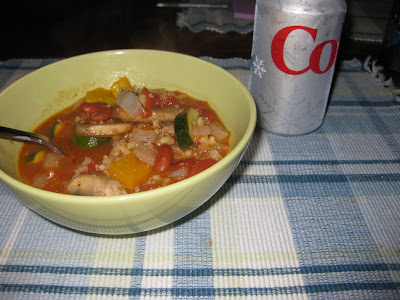 Gotta have my caffeine if I'm gonna make it even another 5 minutes!

Also I did some laundry, so I won't run out of socks and underwear while working for the next 7 days. When stuff comes out of the dryer, I always fold/stack on my bed before putting away. This is especially important on sleep shifting night.  A bed full of clothes can't be slept in! 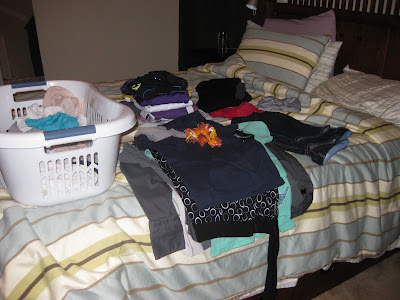 Unfortunately, I was not going to make it awake for much longer. Took a shower, put the clothes away, and watched ANOTHER Gossip Girl episode.
Then I went to sleep for a few hours. I know, I know. But I was tired and my eyes were drooping and the bed was cleared and looked so comfy. Set an alarm for 6, and probably got about 4 hours of sleep. In retrospect I probably should have set it for 5, because I ended up not going back to sleep until 10:30.

At 6 I got up, watched some Once Upon A Time and some Revenge (more, less-guilty pleasures) and made.... Banana muffins with White Chocolate Wonderful PB swirls. I used this recipe, but swapped the Dark Chocolate PB for White Chocolate PB. I have to admit, the one's with Dark chocolate look prettier, but I was in the mood for white chocolate. 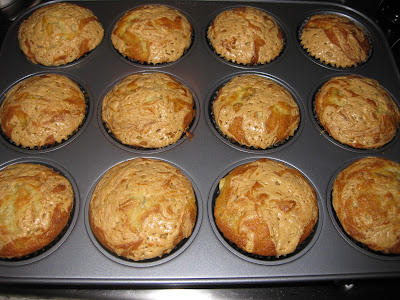 So its February now, and everyone is posting Feb goals. I am training for a 10k (coming up on March 10th) but I can't promise to stick to my training plan this week. Saturday should be a 5 mile run... but I am pretty sure when I get off work today, the only thing I'll be wanting is to crawl into bed. I also try to avoid exercise before work until I'm better shifted (if I even get better shifted, last time I never really got the hang of the new schedule before it was time to switch back) because I'll need every last drop of energy to make it through the shift. There are some 9am yoga classes at my studio that I'm gonna try to hit before bed, but with running I'm going to wait and see. Rather than set any specific goals, my only goal until I'm back from a short stint as a vampire is to listen to my body and not force myself to do anything that I don' think I can handle.

Things that are entertaining me on tonight's shift:

1. My Google reader had 58 unread entries when I started. Lets see how low we can go.

2. Wedinator- my usual night shift entertainment. People do crazy shit for their weddings.

3. Knowyourmeme.com. So far I think my favorite is the "T-Rex hates..." meme. But there's also this more appropriate one- Unimpressed Astronaut.

Posted by Stephanie at 6:30 AM