How come when a week is short, it feels SO much longer than a regular week?
After my crazy weekend we plunged right into a work-week. Usually in-the-office weeks are less stressful than console weeks (nothing like controlling a billion dollar government spacecraft that could break at any time to get your heart rate going) but this week in office work was pretty crazy.
I started training this week for the next level of certification. I'm currently an operator, which gives me the ability to sit console at terrible hours (nights, weekends) for non-complex ops (what one of my coworkers calls "drilling holes in the sky"). This takes about a year of training to be certified to do. After spending 2 years working console with this certification, I'm getting training for the next level up! Exciting. At the same time I had a couple other projects to work, so there was plenty of work to do and no time to read your blogs. Busy busy! My poor Google reader is feeling the pain of a busy vacation weekend followed by a busy week... 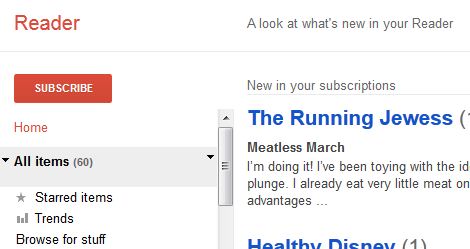 60 items! I'm afraid some things might be getting marked as read, since I have decided I must have an empty reader- one way or another- by bedtime on Sunday.

Here's the busy week in review:

Tuesday- Left work too late to make it to yoga. Did some grocery shopping, and headed home to relax and finish unpacking.
Wednesday- 4 mile run. Boyfriend picked out this awesome recipe for Pizza Casserole. We made a few mods: turkey pepperoni, regular rigatoni pasta, and for sauce we used Emeril Gaahhhlic pasta sauce. It was delicious, but not overly nutritious. 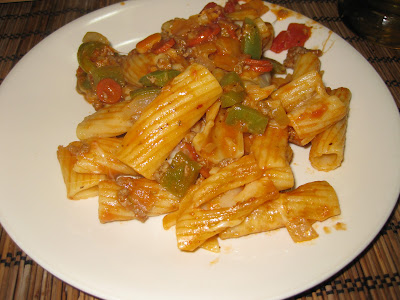 With dinner we popped open the first of our homebrew. This was the real test, as the last 2 weeks in the bottles and one week in the fridge were supposed to get bubbly. Oh goodness were they bubbly! Success! The beer itself was not especially impressive, a bit too much like Miller Lite. But how cool that we brewed it ourselves?! 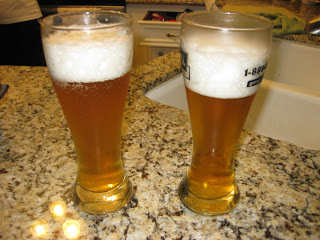 Thursday- Finally yoga night! I hadn't been for 2 weeks and was definitely feeling it. Then snagged some grocery store sushi for dinner and heated up some frozen edamame to go with it, my favorite yoga night tradition.
Friday- As you may have gathered from my Hannukah series, I am Jewish. But my boyfriend is Catholic, so for him it's Lent time which means no meat on Friday. I found a recipe for Seafood Cioppino, a fish and tomato stew.  This was not cheap (those clams cost me 79 cents apiece!) but oh so delicious. The leftovers went into the freezer, I do not want to waste this stuff by letting it spoil in the fridge! 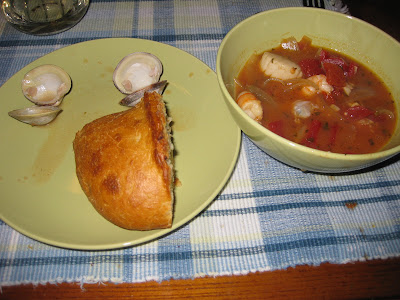 Saturday- I got up early to go to synagogue. I hadn't been in awhile. I've been feeling a little overwhelmed lately... with console, work, all this traveling, cooking, and adding increased exercise into the mix. I was reluctant to spend any time not getting things accomplished. But it actually felt nice, rather than stressful, to go and see everyone and do a little praying. I hope I remember that next time I have an opportunity to go and think about blowing it off.
When I got home, I decided rather than veg, I would give my house a much needed cleaning. I took a tip from a TV writer I follow on Twitter, who does writing sprints- an uninterrupted hour of writing to work on a project. I put 60 minutes on the oven timer. For one uninterrupted hour, I would do as much cleaning as could be done. Then I would get to relax. And so I set about scrubbing the kitchen. I cleaned the counters and applied a natural stone conditioner, I scrubbed the stove, cleaned the knobs, bleached the sink, swept and mopped the floors. When I got done with the kitchen, I had only 8 minutes left, but the bathroom needed some love too, so I added 15 more minutes and headed for the bathroom. I cleaned the sink and counter, wiped down the faucets, cleaned the toilet and shower. Thrilling, I know. It wasn't a deep clean, but it got the job done. When I finished I felt accomplished and like I'd earned the episode of Gossip Girl I rewarded myself with. I highly recommend this tactic- I think I was more productive because I could watch the timer tick down and know I was almost done. 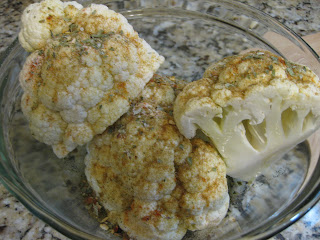 Saturday dinner:
We started with a head of cauliflower. I hacked it into quarters and then we drizzled with olive oil and spices. And some tasty T-bones, sprinkled with salt and pepper. 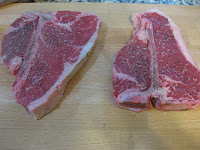 The cauliflower spent about 15 minutes over the flame, then sat off to the side of the fire while the tbones cooked. Here's the delicious finished product: 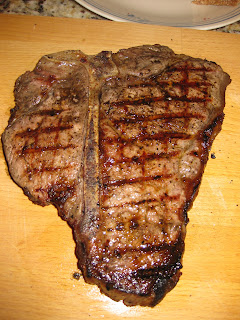 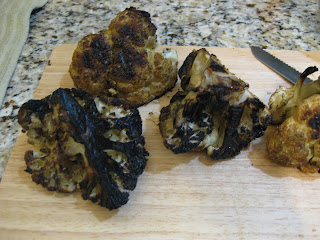 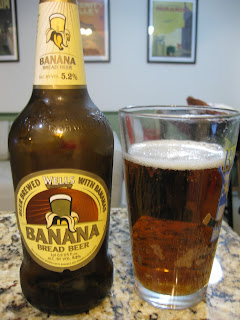 Boyfriend and I split one giant (each was over a pound uncooked) t-bone and saved the other for another dinner, another day. The steaks were grilled perfectly, pink in the middle, cross-hatch grill marks on the outside. The cauliflower was good, but it seemed most of the seasonings didn't stick. Next time we might try grilling them first and seasoning after.

We shared this big bottle of Banana Bread Beer as well. I was a little skeptical of a banana beer, but it was subtle banana flavor and very tasty.

Sunday- Boyfriend went to church, I slept in. When he got back, we went on a 6 mile run! Our 10k is in less than 2 weeks now, on March 10th. I think we're ready... today we ran 6.1 miles in 1 hour and 15 minutes. Then we ordered some pizza, salad, and chicken wings from our favorite pizza place for a post-run lunch.

Now I'm doing laundry and cleaning out my Google Reader. Later I'm off to a Bat Mitzvah celebration for my rabbi's daughter. Hope you had a great weekend, because another week is right around the corner!
Posted by Stephanie at 5:01 PM