Halfway through our training, but summer is just getting started. I shouldn't complain, I guess, because it's been 100 degrees the last week everywhere BUT Houston. Lucky us.

Thursday: 6am wakeup call, 4 mile Tempo run
Oof. Honestly, I was not the least bit interested in getting up. The alarm went off and Dan asked "do you want to run?" "No!!!" screamed my mind. "Yes," I mumbled. Then I rationalized, while the clock ticked down. "What's the harm in skipping one run?" said the devil on my left. "You already skipped runs last week," said the angel on my right. "But I'm TIRED!" "But you won't really get anything out of 40 more minutes in bed." And so, up we got. To say that my whole attitude changed by the end of the run would be a lie. But I was not regretting that I got up and did it. So that's a start.  It was a pretty decent run too, 2 tempo miles in 11:38. Zoom! (Or something like that.)

Thursday night: Random stretching and leg exercises to work out some stiff leg kinks. Also did a few girly pushups... maybe one day I'll be able to do a real one. I hate that I have no upper body strength.


Sunday: 5:15 am 5:40am wakeup call, 6 mile run
I had one of those Saturdays where things didn't go right, so Sunday had to be awesome to make up for it. But Sunday started out just as crappy as Saturday! Alarm was set for 5:15. Fiancé thought he snoozed it but actually dismissed it. Luckily he woke up 25 minutes later and we got up. We got ready for our run and went to make breakfast- we usually have a freezer waffle with almond butter before long runs. But there were no waffles.  I found a smushed Larabar in my purse so we shared that on the drive to the park.
Ew. Lemon Larabar is a huge no-no. I like lemony things and bought it to try awhile back. The lemon flavor was fine (sometimes it can be fake and overpowering), but there was another weird flavor underneath it that was just wrong. Definitely prefer some of the other flavors I've tried.
From there the day got better. No pain in my knees this time, and the run went pretty smoothly despite the humidity. Thankfully we had overcast skies so it didn't get too hot after our late start. And we finished it off with a delicious breakfast at a nearby Jewish deli. Dan ordered Bagel Eggs Benedict- on a bagel and with smoked salmon on top. I ordered the corned beef hash. 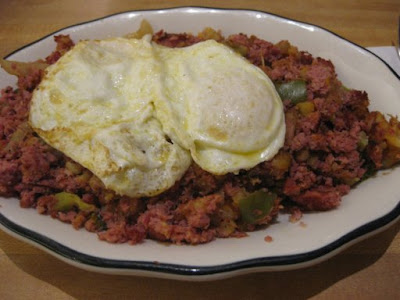 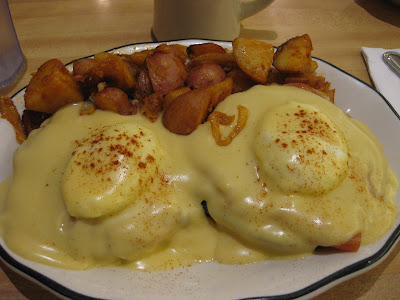 We shared, but the portions were HUGE.  We decided to finish the eggs Benedict, since it wouldn't keep, and take a lot of hash home. Hello lunch tomorrow. For both of us!


Meal of the Week:
Actually I picked a bunch of really delicious meals this week.  I tried tempeh for the first time, and while the tempeh itself wasn't very remarkable (maybe that's the point?) the recipe was excellent. It would also probably be great with chicken- cut chicken into pieces, marinate in lemon juice, skip the water.
The Thai basil chicken was also great- spicy but not too much. So delicious! Fitnessista sangria, amazing (but really strong!). On fourth of July we slept in, had a big breakfast so had a snacky lunch:
Veggie dip (with bread, cucumber, and celery for dipping) and smoked chicken wings made by Dan, accompanied by his homemade blueberry beer! 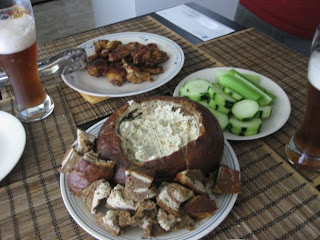 But the winner was dinner that night: we made steak and potato salad. Amazing potato salad! She's right that its pretty tedious to grill all those potato slices, but it sure was delicious! 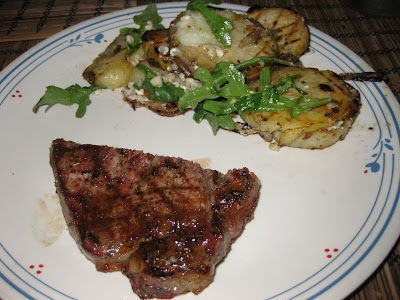 Sunday Set-up
Workouts: step back week
Tuesday: 3 miles
Thursday: 3 miles
Saturday: 4 miles
We're heading to Chicago for the weekend to visit some of Dan's family. It's been hotter there than Houston this past week, hopefully it'll cool down in time for our visit!

Meals:
Monday: Fancy burgers on the grill. Perhaps these?
Tuesday: Leftovers, grocery store sushi, or frozen something. And packing for the weekend!
Wednesday: Taco night!
Thursday: Pasta
Friday: Something from the airport, to eat on the plane. We're flying during dinner.
Posted by Stephanie at 4:00 PM

Email ThisBlogThis!Share to TwitterShare to FacebookShare to Pinterest
Labels: disneyland half, Houston Eats