So you had already seen my engagement ring. It is really unique with the swirly cutouts and the colored stones. I like it a lot, but it was impossible to find a band to match. I considered just skipping a band and having the one ring, or moving this ring to my right hand and putting a plain wedding band on my left, or just getting a skinny plan band to wear with it even though they wouldn't sit right together. 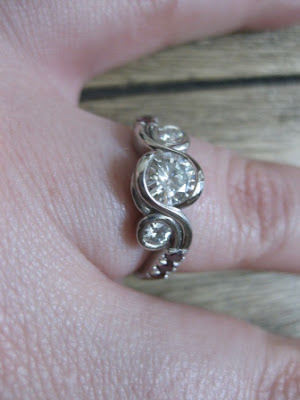 What we decided to do is order a custom band from the same company that the engagement ring came from that would fit exactly. I worried the asymmetry would bother me, but instead it looks like perfect puzzle pieces. My engagement ring fits perfectly into my wedding ring and they clack together when I straighten them and I think its super cool. Of course with that funky swoosh, I can't wear the wedding band by itself. So far, that doesn't bother me. 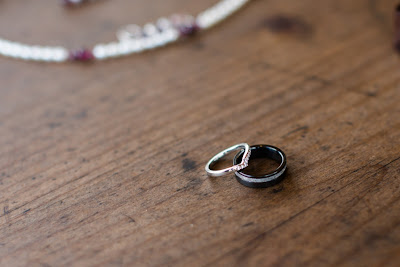 The metal is palladium, some newfangled non-gold metal. The big stones in my engagement ring are Moissanite, which does not naturally occur on earth. It was discovered in a meteorite (cool and nerdy!), and is grown in a lab now for use in jewelry. The wedding band stones and purple engagement ring stones are all lab grown diamond. I didn't necessarily even want diamonds at all, since the industry is shady, but lab grown are at least ethically sourced. Besides, if the world ends, I can pry them out and use them to sharpen my sword or something. 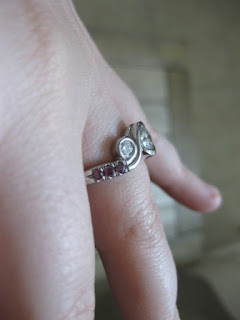 My rings came from Krikawa, who were great to work with and do (as you can see) great work. Though my engagement ring is based on a stock design they had, the wedding band was a total custom job that they did for us.

Dan's ring was also bought online. He spent a lot of time trying to decide on the metal. We went to try some on, but he has skinny fingers so nobody had any rings in his size to try on. 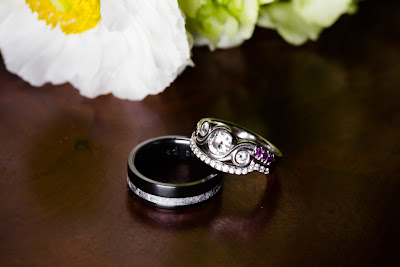 He chose black zirconium (guy rings are made of the coolest stuff!) with a meteor inlay. Yeah, that's real meteorite in his ring! It came from Titanium Ring Co. Among other nice things I could say about them, the ring came in like 4 days, which is absurdly quick!

Both these online jewelers were totally awesome. They sent sample rings/stones and size rings on request, were great with our special orders, and responded quickly. I felt a little weird paying hundreds of dollars to an online jeweler but it turned out fine and we got exactly what we wanted.
Other Wedding Stuff Posts:
Outfits
Makeup
Posted by Stephanie at 8:00 AM