Trying to write an Interfaith wedding ceremony? I've been there! When Dan and I started thinking about our ceremony, we knew that we wanted to represent both faiths as equally as possible. One of our main motivations was making our families feel represented and comfortable. We used the book Celebrating Interfaith Weddings as a guide. It has a number of suggested passages and even suggested ceremonies for interfaith marriages between a Jew and varying branches of Christianity. I highly recommend it if you're in a Jewish/Christian relationship.
Of course there are a million ways to do a wedding ceremony, there is no right way or wrong way. But this was our way, and if you find yourself in the same position, maybe it'll inspire you:

Welcome
Some opening words by our Rabbi, welcoming our guests. It included a common Jewish welcome blessing in both Hebrew and English: Blessed are you who come in the name of the Lord.
(Everything said in Hebrew was repeated in English, so everyone could understand.) 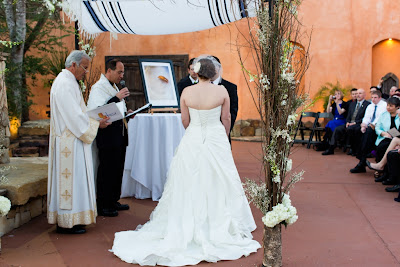 Acknowledging Different Traditions
(There were options in the book for these passages, but I didn't like any of them that much, so I wrote my own. It was read by the deacon who co-officiated. And even though I wrote it, it almost made me cry.)


"On their Ketubah, the Jewish marriage contract which will be signed later in the ceremony, Stephanie and Dan begin with a quote from the Book of Ruth: "And Ruth said, ‘Do not entreat me to leave you, to return from following you, for wherever you go, I will go, and wherever you lodge, I will lodge; your people shall be my people and your God my God.’"
Stephanie and Dan chose this verse to emphasize that, though they have some differences of faith and tradition, they ultimately believe in the same God. Today we will honor both the Catholic and Jewish faiths in the rites and rituals of the marriage ceremony. Today they join their lives together. His people will be her people. Her people will be his people. Whatever they do, wherever they go, they go together." 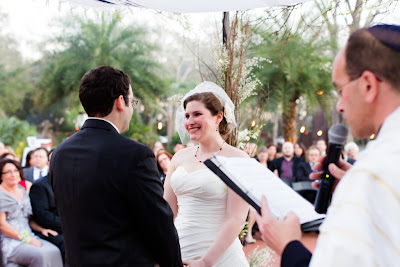 Readings
The Catholic wedding ceremony contains three readings- Old Testament, New Testament, and Gospel. The Jewish wedding ceremony doesn't usually contain a reading. We decided to do 2 readings, 1 Torah/Old Testament and 1 New Testament.
We picked Genesis 2:18-24, where God creates Eve from Adam's side (the Christian translation uses "rib," but Jewish mysticism suggests that the original Adam may have been either a hermaphrodite or had both male and female parts, which were separated here into two beings) as his helper. Then we chose Mark 10:6-9, where Jesus quotes our Genesis reading and says "What God has joined together, no human being must separate."
The Torah reading was done by my cousin and the Gospel reading by Dan's sister-in-law (who is my sister-in-law now, too!). 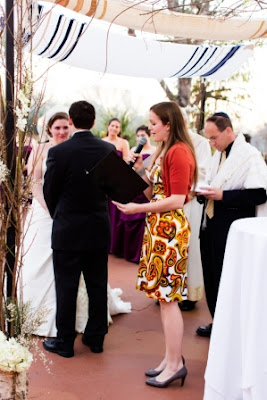 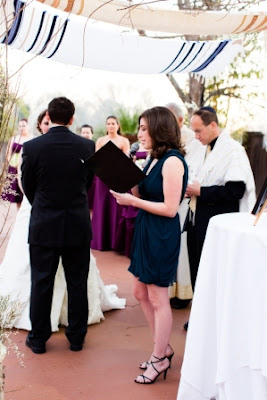 Personal Remarks
Both the Rabbi and Deacon prepared personal remarks about us to include in this part of the ceremony. You can read the Rabbi's remarks here.

Vows
We chose the Catholic vows because the vows are an important part of the Catholic tradition. Since we were not married in the church, however, the Deacon could not receive the vows. Our Rabbi read the vows and we repeated:
I, (name), take you, (name), to be my (wife/husband). I promise to be true to you in good times and in bad, in sickness and in health. I will love you and honor you all the days of my life. 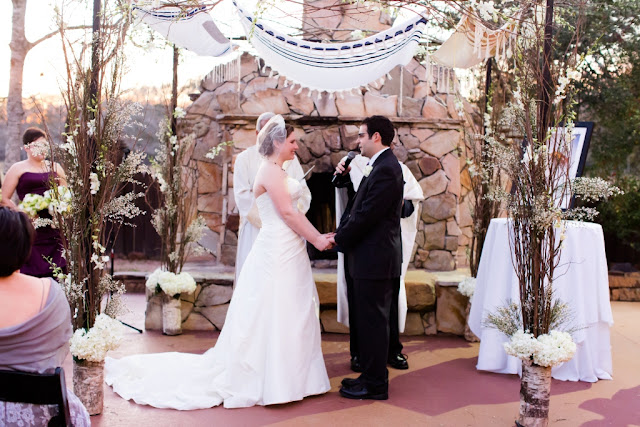 Rings
In the Catholic tradition, the rings come right after the vows. In the Jewish tradition there aren't really vows, and only the groom gives the bride a ring (in many modern Orthodox couples, the bride will give the groom a ring later, not as part of the ceremony; in many modern, non-Orthodox couples they go ahead with the 2 rings during the ceremony.)
The intro went like this:
These rings represent the enduring trust and affection that you bring to one another, and are the outward and visible symbols of an inner spiritual bond.
In both ceremonies, you say something while putting the ring on their finger, but neither of the sayings fit us, so we chose a more generic:
I give you this ring as a symbol of my commitment to you and to our partnership in life. 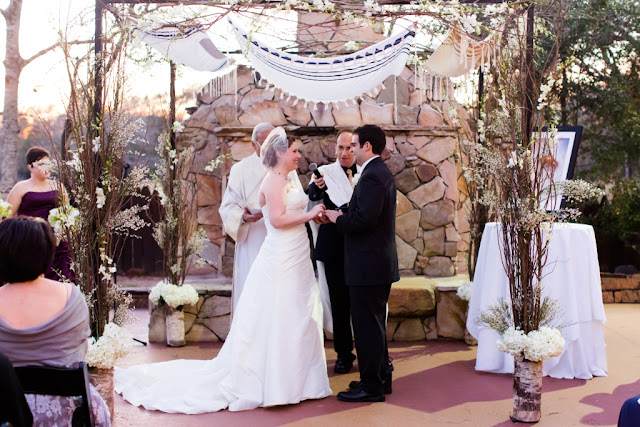 Ketubah
The rabbi briefly explained the ketubah tradition. Then my aunt read it aloud, and Dan and I, along with our two witnesses, signed it.
One of my bridesmaids and one of Dan's groomsmen signed for us. Though not a binding ketubah and not kosher witnesses, we did stick with the tradition that your witnesses not be related to either the bride or the groom. 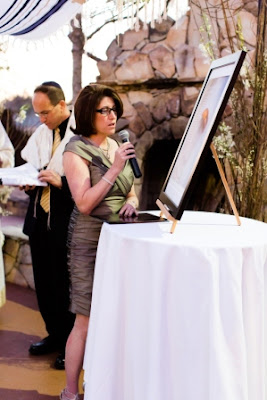 Nuptial Blessing
This is performed during the Catholic wedding ceremony. The Deacon very kindly tweaked the wording to make it interfaith. We went back and forth on this a lot, because we still wanted to represent the Catholic faith appropriately but didn't want to alienate the Jews in our midst. It eventually came down to feeling that neither of us should have to have anything in our wedding ceremony contrary to our beliefs, and calling him "Christ our Lord" definitely fell into that category.

Holy Father, creator of the universe,
maker of man and woman in your own likeness,
source of blessing for the married life,
we humbly pray to you for this bride
who today is united with her husband in the bond of marriage.

May your fullest blessing come upon her and her husband
so that they may rejoice together in your gift of married love.
May they be noted for their good lives
and be parents full of virtue.

Lord may they both praise you when they are happy,
and turn to you in their sorrows.
May they be glad that you help them in their work,
and know that you are with them in their need.
May they reach old age in the company of their friends,
and come at last to the kingdom of Heaven.

We ask this in the name of our Lord.
(We put in our programs that people could respond Amen here if they desired, giving people the option but not an order, and also not leaving those not familiar with the tradition hanging when everyone but them knew what to do.) 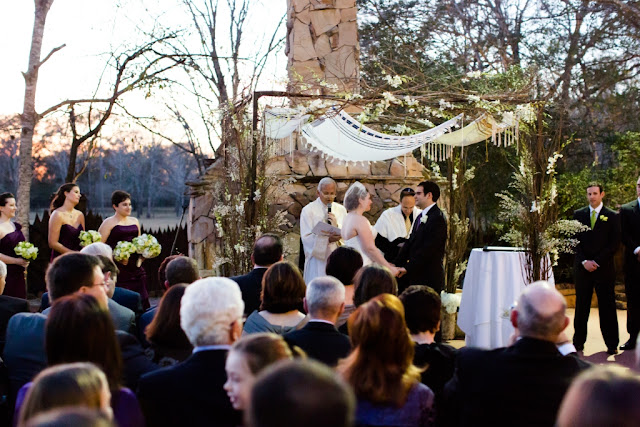 Priestly Blessing
Funny story, the Priestly Blessing hangs in the foyer in my in-laws house. I saw it there when I first visited them with Dan almost 3 years ago for Thanksgiving. At the time, it intrigued me, because I knew it from grade school, learned a very different aspect of it at the orthodox synagogue I now attend... but didn't know that Catholics used it so frequently in their own prayer services. I jumped at the chance to put it in our wedding ceremony, as it truly represented a commonality between our religions. The rabbi said the Hebrew, then the deacon repeated in English:
May the Lord bless and keep you.
May the Lord shine his countenance upon you and be gracious to you.
May the Lord look upon you with favor and grant you peace.

Pronouncement
We were pronounced husband and wife, (according to the "Great State of Texas" because it's what you do here). I argued for an egalitarian kiss-type wording, but Dan wanted them to say "You may now kiss the bride." I let him have that one. 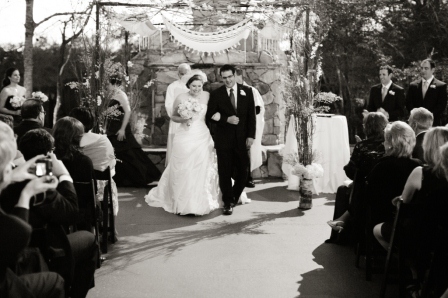 More Interfaith Wedding Posts:
My guest post at APW on finding an officiant
When the last Rabbi in Houston turns your down
An open letter to the Jewish community about Interfaith Marriage
Our Interfaith Ketubah
My wedding grad post on APW

See the Nerds in Love page for more wedding goodness.
Posted by Stephanie at 8:00 AM