Only one week to go til the race! Let's check out the weather:
This week I was struggling with getting back on a usual sleep schedule. In fact Thursday night was the first night I slept most of the night without the help of NyQuil. Not only that, but I felt tired, sluggish, and headache-y during "waking" hours. We had planned to get up and run Tuesday, but I got around 4 hours of sleep, spending most of the night lying awake wishing I could sleep, and just could not bring myself to get out of bed when the alarm went off, only about 2 hours after I had finally fallen asleep for real.  I usually can get myself to get up by saying that I don't need that extra hour, but that day, I really did need the extra hour.

Thursday- 6am wakeup call, 4.6 mile run
Planned for about 5 but I was missing my running buddy and just BORED. I think running might not be a good sport for me, because being alone on the road with my sneakers and my thoughts is not relaxing or therapeutic to me, but SO BORING.

Saturday- 5am wakeup call, 10ish mile run
I say "ish" because the Garmin died about a mile in. I charged it before my run Thursday and figured it had to have enough juice for a 10 mile run after only being on for about an hour. But I don't know if I accidentally left it on or if the batteries are just shot, but it was dying when I turned it on.
As usual we headed to Memorial Park for our long run, to have shade, water fountains, and bathrooms along the way. Towards the end of the 9th mile I started getting a little lightheaded so we walked extra, ate our last chews, and stopped at every water fountain along the way.  Luckily, as we finished up, we passed this happy occasion: 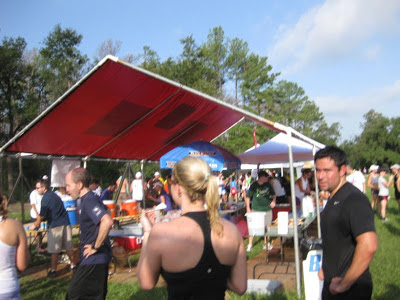 The Houston Area Road Runners Association had set up snacks and drinks, to kickoff the winter/spring race season (and remind me that only crazy people train through the summer for a Labor Day race when they live in Houston). We grabbed watermelon, Gatorade, beer, and a bagel to scarf down. It was like we had just run a race instead of a training run!
Even though I felt kinda bad towards the end of the run, I think that if we had more chews it would have gone better so I'm not too apprehensive about the race next weekend. My plan is to bring enough fuel to snack at each of the 3 walk breaks and hit all the water stops I can. I also tested out my new belt pack with the camera and it went ok so I know I can carry that during the race too.

We hurried home so I could shower and turn right around to leave again, this time for a hair consultation for the wedding. Check, another thing off the wedding to-do list. Then I met Dan and his sister (who is visiting us from New Orleans) for lunch at one of our favorite spots, Beavers!
This coming week is a few short shakeout runs, then we leave for the race early Saturday morning. Dan's sister is with us for a couple days- she came for the weekend, but her home is about to be hit by Tropical Storm Isaac, so she's gonna stay a little longer.

Posted by Stephanie at 6:06 PM

Email ThisBlogThis!Share to TwitterShare to FacebookShare to Pinterest
Labels: disneyland half, Houston Eats