Back in the wedding planning phase, I wrote about making our spice rub favors for the wedding. However the recipe I kept secret... until now.

To form the recipe, Dan and I kept iterating spice rubs (we ate a lot of steak... poor guy!) until we got one we liked but thought had mass appeal... keeping track of the ingredients and proportions until we got it just right. No joke, this recipe has lived in my kitchen junk drawer on the very post-it-note that we wrote it down on a year and a half ago to guide our mixes: 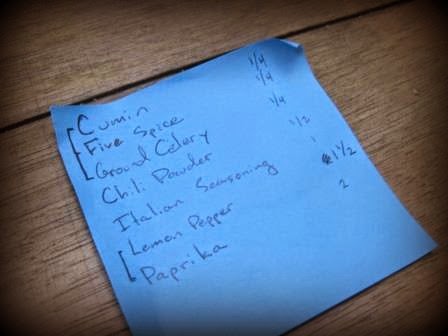 After getting a couple requests for the recipe, we talked about it and decided that we'd give it out after our 1 year anniversary.. which was almost 3 months ago, sorry it's taken me so long to write it down!
We made ours in cup measures (1/4 cup, 1 cup, etc.) since we were making 100 jars, but you can make yours in teaspoon proportions instead (unless you WANT almost 6 cups of this stuff?).


From our kitchen to yours... enjoy!
Posted by Stephanie at 7:59 PM