Disneyland Half Recap- Part 2, the Logistics

Growing up only a few hours from Disney, and going to college as Mickey's neighbor in Orlando, I have always loved Disney! As I got older, I also have a lot of respect for Disney as a business. The way they can effectively separate you from your money (it's true, nobody makes you smile more as they charge you a ton of money for stuff than Disney!), the way they can become a brand rather than a surname in just one generation, the way they move massive crowds through long lines without anyone losing their marbles... just generally very impressive practices.
Aside from that, I have always associated Disney with fun (and my birthday- in college we went there Labor Day weekend at least 3 of the years)! So when I decided it was time to run a half marathon, and accepting that it might be awful and I would never run another, I decided it had to be Disney. 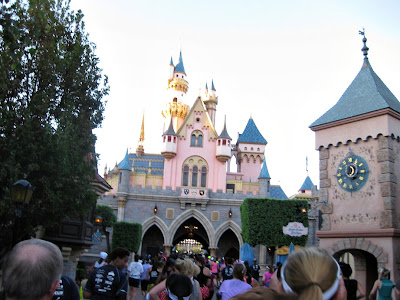 This race was, overall, very well organized. 17,000 people signed up,and almost 15,000 finished but I couldn't have told you that there was more than a few thousand out there thanks to the staggered wave start and the many corrals spread around the start.  The race did get crowded in times, but they never ran out of water, snacks, bathrooms, or volunteers. We stopped at 7 miles to use the bathroom, and since we were in the next to last corral most people had already gone by there... and they still had toilet paper and hand sanitizer in the port-o-potties. Color me impressed!


A few minor issues with organization:
We had some trouble at the expo. Having never been to Disneyland resort before (went once to the park for a day with my family 5 years ago, but we just went right to the park) we didn't really know where things were. There weren't signs leading to the expo so we just wandered around the nondescript Disneyland hotel buildings until we saw people with race packets. Then because we entered through the not-main entrance, there was no sign pointing us to go downstairs to the underground parking structure where the bibs were. We ended up weaving our way through the expo to the shirt table only to find we had done it wrong and weaving our way back out.

Likewise, no signs telling us how best to get to the start. We just followed some people in bibs and hoped for the best (it worked out ok). 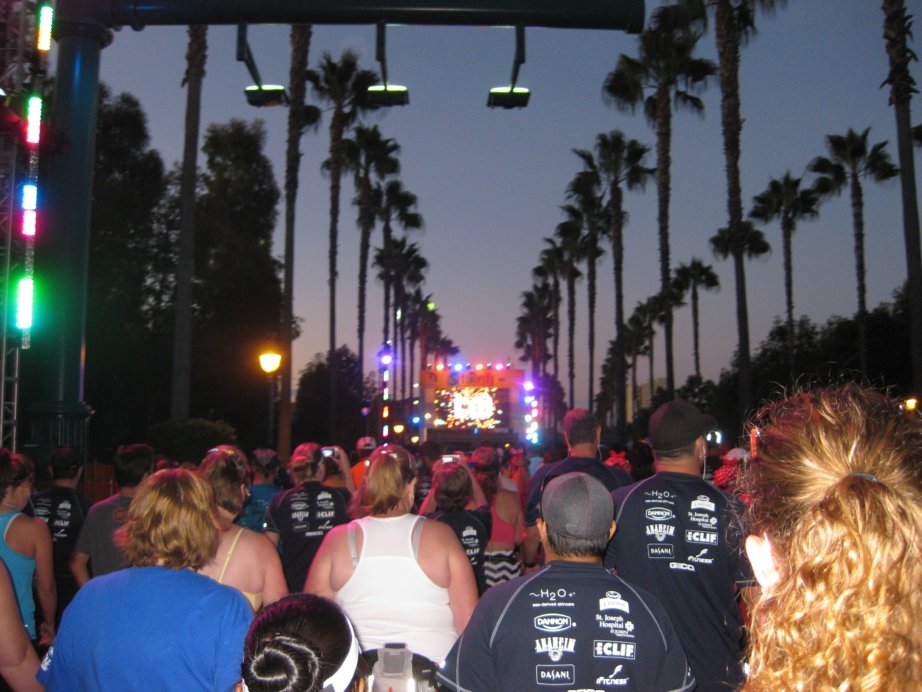 When we got to the start area, there was major slowdown/bottleneck as people tried to get to the corrals, the bag check, etc. We got a little lost misunderstanding a sign pointing us to our corral too. When our corral moved up, a half hour after the official start time, there were still people on the sidewalk walking towards the entrance at the back of our corral.

One thing I was extremely disappointed with was the post-race snack. I've done a few races, some big, some small. All have had much better post-race snacks. Heck, our run 2 weeks ago at the city park had better post-run snacks. The box had a little bag of crackers, some raisins, some gummy energy things, some pb, and a mini candy bar. Where's the bagel? The pizza? The fruit? The BREAD? I just ran 13 miles, I didn't do it for a tiny box of raisins!


Overall it was a good experience. If it was any other company I probably wouldn't have noticed most of this, but as I said above, I hold Disney to a high standard and any little glitch seems magnified compared to how smoothly everything else goes.

Some things we did right:
For one, I'm so glad we stayed at a Disney hotel. We stayed at the Grand Californian, very beautiful, three big pools, and backing up onto the California Adventure park. It was expensive. Like, way expensive. But SO convenient. I had thought about getting a cheaper off-site hotel, but in the end decided to splurge in order to be closer to everything since we were unfamiliar with the area. It worked out... We were walking distance from the expo, the start line, the parks, and Downtown Disney. On the morning of the race, we could get up a little later and still make it with plenty of time. We could walk, rather than drive or catch the shuttle, and we could hobble home at the end. And afterwards, when both of us were so sore we could barely walk, we could easily hobble over to California Adventure or Downtown Disney and find a restaurant. 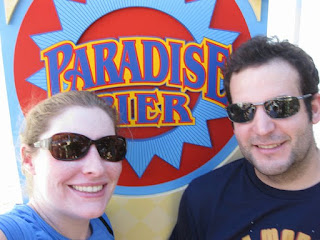 I'm also glad we took it easy the day before. The allure of the parks right there is hard to pass up, so I specifically planned our vacation so we got in midday Saturday and could hit the parks after the race rather than before. We were both sore and tired after the race, but still had a good time roaming the parks. (Hardest part? Lowering yourself into a ride you have to step down into with sore, tight legs!)

Email ThisBlogThis!Share to TwitterShare to FacebookShare to Pinterest
Labels: disneyland half