Disneyland Half Recap- Part 1, The Race

Whew! So this being my first, oh-so-exciting half marathon, I have a lot to say. I'll jump right into the race recap and hit logistics on a follow-up post:

After checking into the hotel to drop our bags with the bellman, we headed straight to the expo to pick up our bibs. Then we headed to Trader Joe's (a must-stop for me to pick up some more cookie butter!) and CVS for provisions. Chief among them was sunscreen- since I could only pack little 3oz bottles in my carry-on I had to buy a big bottle of sunscreen to last my super pale skin through the trip. 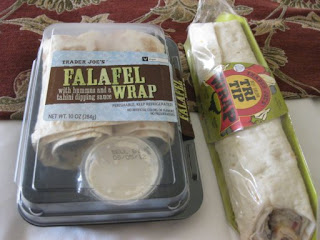 We headed back to the hotel, set up our clothes, and ate Trader Joe's wraps we picked up for dinner (falafel for me, tri-tip for him). The time change was in our favor (2 hours later at home) and with the early wakeup call we had no problem crawling into bed at 7pm. Party freaking animals! 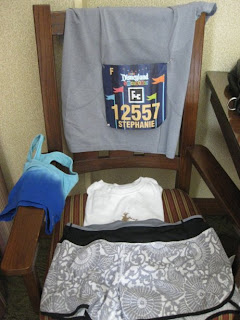 I had terrible dreams all night long. In one dream, I overslept the race but decided that I would go run it anyways, so there is dream-me all alone running the race after it was over.  In another, I was being chased by scary riot-squad-looking sweepers (one of my main fears going into this race is that we would get swept on a walk or bathroom break if we didn't build enough early margin over the required 16 min/mi pace). When I told Dan, he told me it was Disney, so even the sweepers would probably be nice and wish us a magical day. I'm sure that's true but (spoiler!)  we never found out!

At 4am we got up, got dressed, and ate some bagels we picked up at TJ's with some chocolate Jif I brought from home. Then we joined a mass of other people walking through the hotel lobby, across Downtown Disney, and into an even bigger mass of humanity trying to get to the corrals! 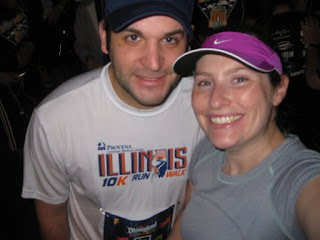 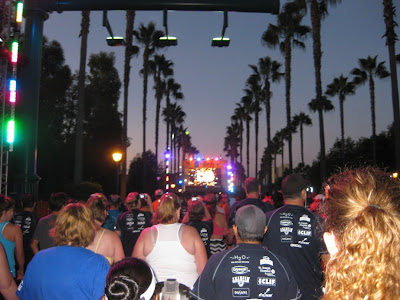 I knew the early part of the race went through the parks so I planned to carry my camera in my hand until our first walk break. I was surprised that it wasn't annoying at all. I felt like I could carry it the whole race, but didn't want to press my luck so at our first walk break it went back in the bag. 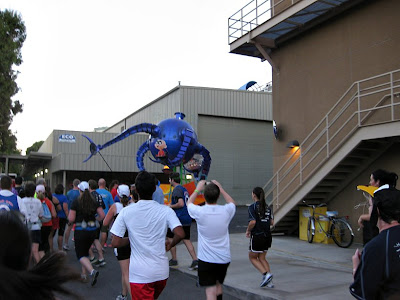 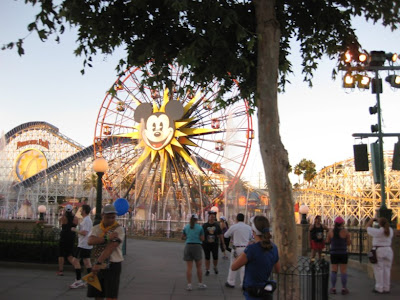 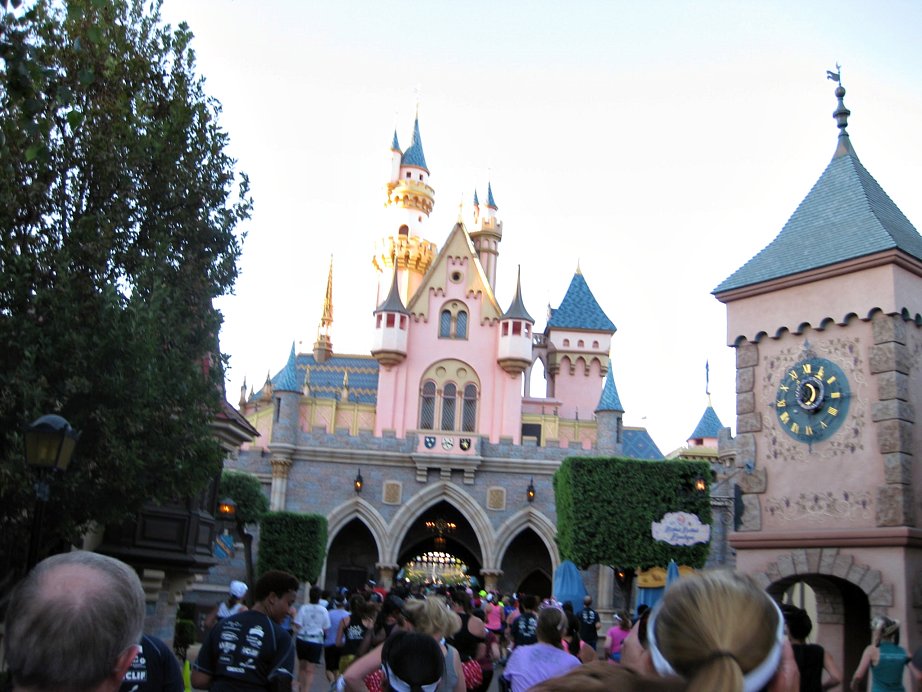 The race through the parks was very narrow at times so we spent a lot of time dodging walkers and slower runners. At the 4 mile mark we felt pretty good, but stuck to the plan and took a walk break plus ate some shot blocks. 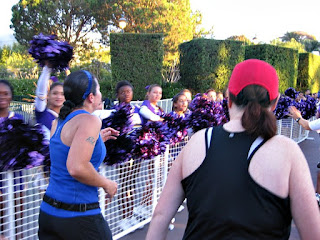 They did a great job of having on-course entertainment as we headed out into Anaheim, including cheer squads and dance teams from local high schools, boy and girl scouts, and Dan's
favorite: about a mile of classic cars! 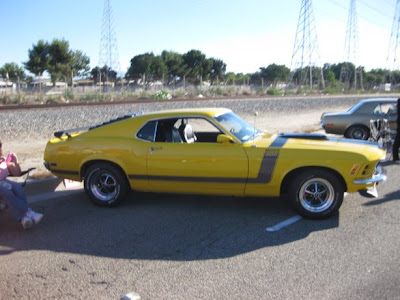 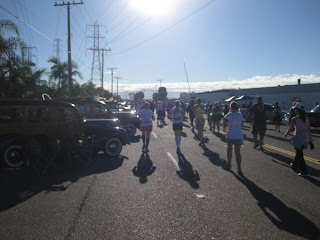 I finally understand what people mean when they say they settle into a cruise for the mid-part of the race. Yes we were running, but we weren't hurting or panting, and through the long stretch of miles between the parks and the Angels stadium, we just plodded along. The course widened up to about 5 road lanes, so we didn't have to do much dodging either.

In training we had skipped a snack in the second walk break, but ended up feeling depleted after 10 miles, so we bumped our second snack to the 7.5 mile walk break- Dan ate more shot blocks and I had a chocolate Gu.


Finally, we hit the Angels stadium (the home stretch, pun intended)! It was pretty cool to run around the field, but the steep downhill/uphill to get us from road level to field level was a bit painful. I even slowed to walk on the steep downhill to give my legs a tiny break. Looks like I forgot to get my camera out for that. Oops! We got out of the stadium, right to mile marker 10... no-man's land. This was as far as we'd ever run before, and still a mile to our next walk break! 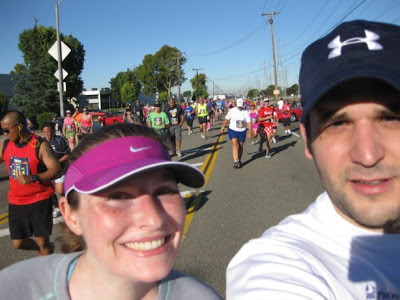 By this time, I was in a fair amount of pain, and it was all I could do to convince myself to run again when our half-mile walk break was up. Mile 12 was by far the worst- not only were we hurting, but it was all in a back-stretch of Disneyland, with no crowd support. We rounded one corner and another and another and still no finish line. I took an impromptu walk break at almost-13 miles, just couldn't keep running. At no point did I really think about quitting, though I definitely would have walked more if I hadn't been with Dan. He was running strong and I didn't want to let him down!

We picked it up again when we got out of the back road of the park. We turned another corner to find.... The finish!

(That this is a video is totally an accident. My camera got flipped from photo to movie mode in my waist pack. I was trying to take pictures and couldn't figure out why it wouldn't take. It's so short because I was pushing the shutter over and over to get pictures, but got a couple short videos instead!)

We crossed hand in hand, got out of the way, and hobbled through the drink station, the medals, the photo stop, and the snacks.  Half Marathoners! 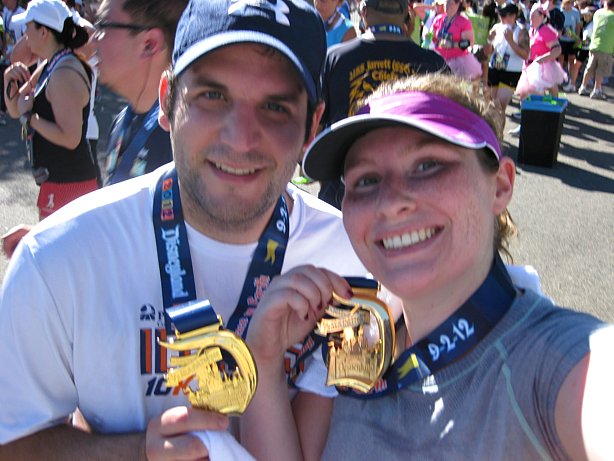 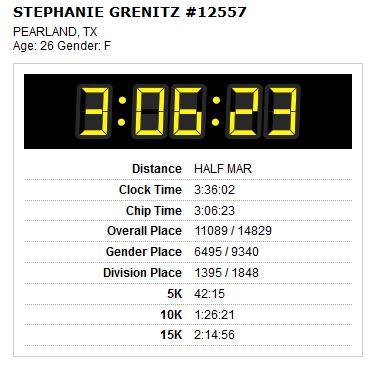 This is a little slower than I would have liked, but that just means there's room to improve next time! And yes, I'm already thinking about when our next race will be. I thought for sure I would be immune from half marathon addiction... but nope, I'm totally hooked!
Posted by Stephanie at 12:21 PM

Email ThisBlogThis!Share to TwitterShare to FacebookShare to Pinterest
Labels: disneyland half