Hey team! I know I've been silent for a couple of weeks. Between work work and school work and my for some reason very happening social life, I've been too busy to blog.

Last weekend Dan and I headed up to the Texas Renaissance Festival. As with all things, Texas does Ren Fest bigger than any I've ever seen. There's a whole permanent fairground north of Houston (with traffic it took us 2 hours to get there). Last year I bought this beautiful purple and black corset, so I bought this dress on Amazon to go with it. 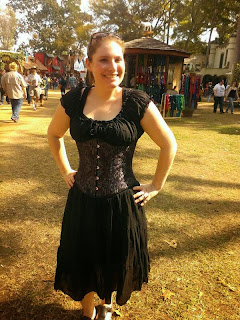 I think I look pretty hot. Corsets are certainly not something I would like to wear every day, but you can't deny it gives your waist (and boobs!) a nice shape. The weather was pretty great on Saturday and we spent the whole day drinking and eating and wandering around before making the 2 hour trek back home.

Sunday I did some homework (my second paper is due next weekend) while Dan cleaned the house... his parents are coming to visit next week for the long Veterans Day weekend, so it was time to ready the guest quarters.

In other news, we signed up for a half marathon on Feb 16th in Austin and training begins tomorrow...16 weeks to go! So that's what's new around here! Some things for your reading pleasure...

And that's all for now. Have a good week!
Posted by Stephanie at 7:00 AM