"Married in the Catholic Church" Review

A few weekends ago, Dan and I attended a marriage prep class called "Married in the Catholic Church: Does It Matter?" We didn't really know anything about it before we signed up, except that it was on a weekend we were available. I tried searching online for information on it, but there wasn't any.  I'm going to give a detailed recap of it here so that maybe the next person who searches for it will have a little better idea than I did.

If you're new here, you should know that I'm Jewish, but marrying a Catholic. Jewish weddings are different- there's no central authority in Judaism on weddings, no required counseling... you don't even need a rabbi, just 2 witnesses and a ketubah. Truth be told, I find the bureaucracy that Catholic weddings are infused with to be a little tedious (not the counseling specifically, but all the forms... like the dispensation to be allowed to marry).

To get the Church's permission to marry, you have to do one-on-one counseling with a Deacon or Priest and go to some kind of counseling class. Married in the Catholic Church (MICC) is a 2 day program which started with dinner on Friday night and ended with mass on Saturday afternoon. It's one of a few ways to satisfy the counseling class requirement. Unlike the more prevalent Engaged Encounter, this is a commuter program, which means you go home on Friday night rather than sleep in a dorm.  My worst fear was that we were walking into a room full of fanatics who would lecture us for our bad decision to marry outside our faiths. That was unfounded. Everyone was close to our age and seemed normal enough, although there wasn't a lot of interaction with the other couples.

The program consisted of 7 discussions, each led by a different married couple. They would talk about the topic and how it relates to their own experiences for about 30 minutes, then we would have about 10 minutes to do the worksheets in the provided workbook solo, then go discuss the topics with our future spouse until the hour was up. 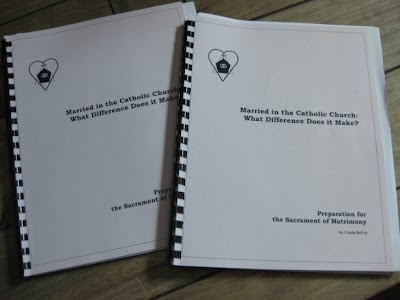 The topics were:
There was also a Q&A session with the church's priest, where we could anonymously write questions on slips of paper and put them in the bucket for him to answer. The weekend also included time for confession and mass, but both were optional.

Some of the discussions were pretty good. The communication one (which also talked a little about budgeting) was pretty useful. The workbook contained a formula for having a fair and productive argument, which Dan and I actually used as a jumping off point to work through one of our biggest issues- What to do when we are 1 married couple owning 2 homes? We actually have been fighting on and off about that since getting engaged, and it's something that I worry about a lot since I view it as a serious financial stressor and barrier to the next step (the rule is no babies until we only have 1 house, because babies are expensive). We worked out a plan, and I am already more relaxed about it. So that's pretty awesome.

Some of the other sessions also gave us some interesting things to think about and maybe go back to the workbook and discuss, on another day. There was no painful icebreakers, no standing in front of the audience to give your perspective, and it was nice to spend time with my fiance and talk about things. I also enjoyed the Ask a Priest segment, which might have been more interesting for me than most since I know less about Catholicism (and still regard priests as something of an oddity... it's the celibacy thing).

Now for the bad news. I can't say the "sex talk" was all bad, but I definitely have some gripes. The host couple said that they throw different angles out, hoping one will stick, and they certainly did. Everything from "Natural Family planning is more natural than putting drugs in your body" to "NFP couples are less likely to get divorced" to "NFP is the way God intended it." I suppose my two biggest issues with the talk were:
The other issue we had is that the course basically ignored interfaith couples. The lecture on why you need to get married in the church focused only on Sacramental marriage as a spiritual commitment. We can't have a sacramental marriage (only for a couple in which both are baptized), so should we not even bother? There was also a lecture on the importance of canonical form in your wedding and "doing it the right way", although Dan and I will be getting a dispensation for that so we can include Jewish elements and not have it in a church. Does that make our marriage wrong?
I don't think they believe these things, but I think a lot of the language used was unnecessarily excluding or hurtful to interfaith couples. I think that a short term solution would be to try to be more sensitive to the audience (we were not the only interfaith couple there, although we might have been the only one where both were not Christian), but that the real long term goal should be to offer a class specifically for interfaith couples. Sure an hour session on the 10 commandments doesn't hurt, but an hour (or more- it's a big topic!) on the unique challenges to interfaith couples could have been more helpful.

So there you have my thoughts on the weekend. Hopefully if you found this while looking for info about MICC, I was helpful. Of course this is one woman's opinion, and a non-Catholic one at that... but at least it's something.