Something you may not know about my family: We are a tailgate family. (Yes, that's a thing.)
My parents have season tickets to the UCF football games. They drive the 3ish hours from Fort Lauderdale to Orlando in a Suburban stuffed to the brim with tailgate gear. My mom, a combination of the ultimate Jewish mother (loves to feed people) and the ultimate organizer, throws epic tailgates. I enjoyed many of these wonders in my college career, and several since (sadly all before this blog was started so I don't have any pics for you...).

So a few weeks ago, a coworker who played football for Univ. of Cincinnati rallied the troops to attend the Univ. of Houston-Cincinnati game in Houston this weekend. In grand family tradition, I offered to organize the best damn tailgate they'd ever seen... despite the game starting at a lame 11am, and despite Houston having some even more lame weather.

But we made it work. We got there at 7:45am, set out tent up quickly in the rain, and huddled under it to stay dry.

I made breakfast burritos and mimosas (my mom's traditional morning game fare) while my coworker Melissa and her husband, our carpool buddies, brought hot cocoa and hot buttered rum to keep us warm.
The carnage: camp stove caked in egg, breakfast burrito ingredients scattered about, and a teakettle for boiling water. (Due to the rain we didn't get to really unpack, so stuff was thrown everywhere as needed; and the ground was wet, so the table was a bit crowded) 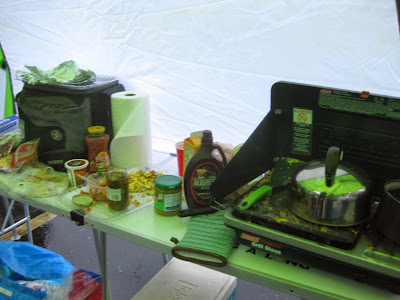 Around 9am the rain stopped (right on cue per the weather channel app) and we got to finally emerge from the tent and set up our chairs. No longer wet, but still pretty cold: it's not every day you see gloves and knit caps in Houston! 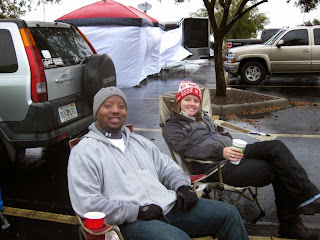 The whole crew (minus a couple late-comers) for a self-timer photo. I was rocking my UCF Rally Scarf for the tailgate, but I swapped it out for a Cincinnati sweatshirt for the game. 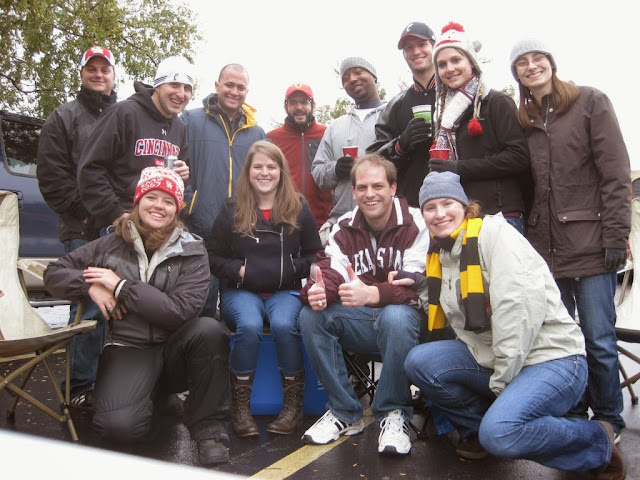 Below is a full view of our new tailgate tent, and our amazing spread of food and drinks, plus cocoa-chef Brian! If you are looking for a tailgate tent, our new tent is pretty great. Setup was easy (although we were highly motivated, due to the rain) and the curved sides and (removable) back flap helped keep the rain out. It leaked a tiny bit at the top (there's a vent flap to let hot air out- it's more of a warm weather tent) but overall kept us and out stuff dry. I can't say how it holds up over time, but the first outing went well. (I get nothing for saying this, I just liked the tent.) 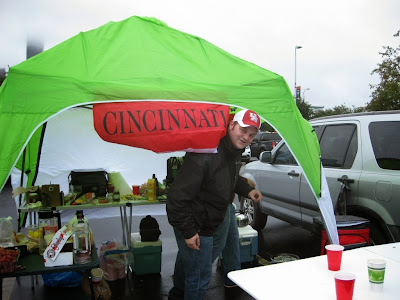 Before we knew it, it was game time. Our seats were amazing. First and second row on the sideline- pretty far down to one side of the field, but still a great view. And the Cincinnati cheerleaders and mascot were right in front of us. Sometimes, the Bearcat came to visit... 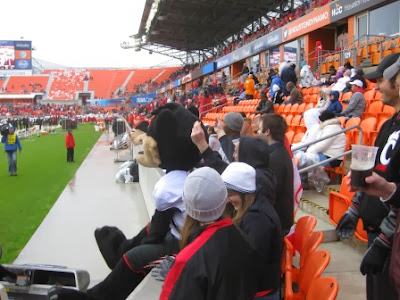 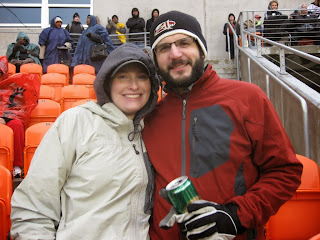 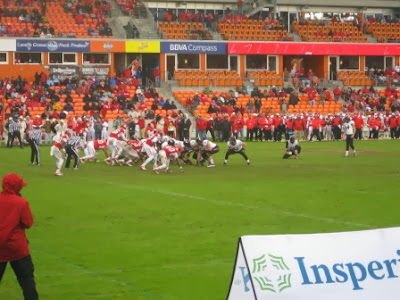 (Un)fortunately, Cincinnati won, so they are still right behind my UCF Knights in the conference standings. This means we have to win our upcoming games to stay ahead of them and secure the BCS automatic bowl berth for our conference. If UCF makes it to the Sugar Bowl, a mere 6 hours away from here in New Orleans, we are seriously considering making the drive for the game. Fingers crossed and Go Knights!
Posted by Stephanie at 7:30 AM