Hello! Hard to believe I haven't written anything here since the fridge-pocalypse. We did finally get a new fridge on July 23rd, 20 days after it died, and following a series of unfortunate events and the freon-murder of many ozone molecules. I finally became convinced that I was in some cosmic comedy sketch when the truck carrying our brand new fridge broke down 45 mins from our house and we had to wait one more day for delivery. Since then, it's been a very eventful summer.

On August 1st we packed up the rocketmobile* and headed east to Sapphire, NC where my parents bought a vacation home last year. We decided to drive so we could take the pup, who was a champ in the car. On the way, we camped overnight at a state park in northern MS:
Once in NC, he received lots of belly rubs from lots of different people, but I think I'm still his favorite. It was a bit of a family reunion, since we hadn't gotten the whole family together since my wedding last Feb. My sister and her boyfriend drove from Ocala to Orlando, linked up with my brother and flew out together. My grandparents have been staying in the house most of the summer (even more than my parents), and my other grandfather flew up with his "very special friend Phyllis" (that's how he introduced her to my friend a few years ago, and we thought it hilarious) for a few days. And my aunt and uncle drove up from Atlanta for a few days as well.

Dan and the boys played a lot of golf and I spent a lot of time relaxing. We did go on a nice hike up Whiteside Mountain and spent a day on a pontoon boat with the whole family. 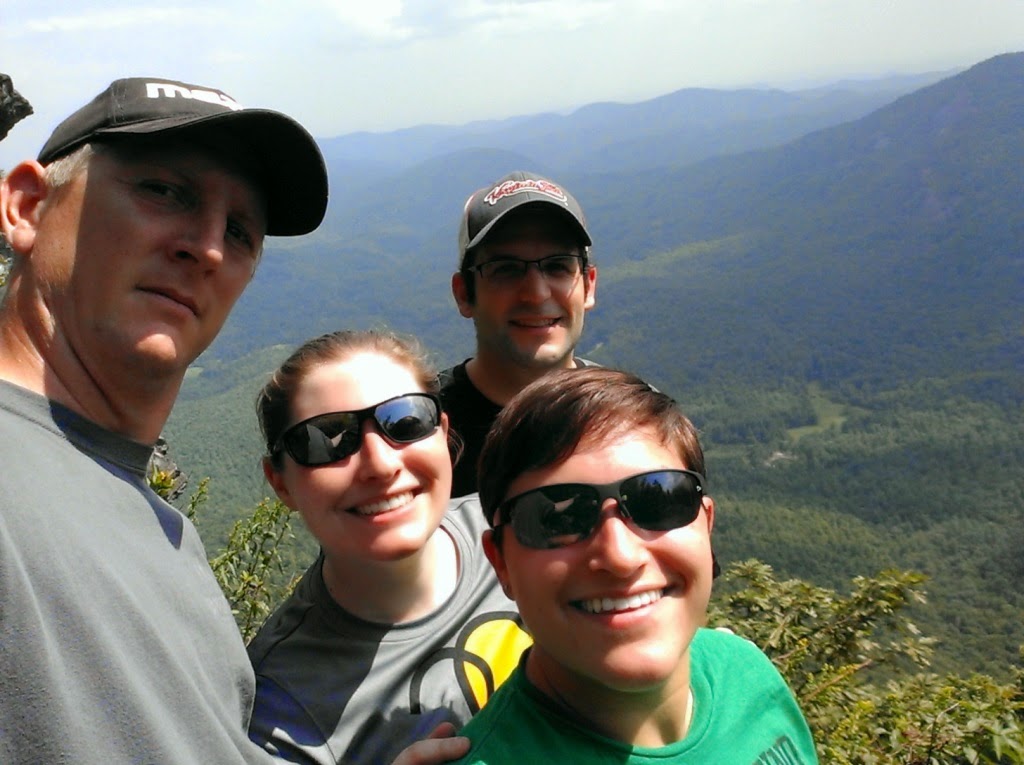 We spent a whole week there before heading back to Houston. We planned to camp overnight in Tuscaloosa, AL but there ended up being terrible rain storms so we checked into a hotel instead.

*The rocketmobile is my beloved 2002 Honda CRV, my first car that I got when I was 16 (actually that my mom got and drove around for a few months when I was 15.5, before passing it on to me). Though I daily drive my new (well newer, can't believe its 3 already) blue Juke, the rocketmobile has a special place in my heart. It's also the perfect size for our family of three (well, 2 people and 1 dog) to take a decent-length road trip and not be short on space. When I road trip, my snacks get a whole seat to themselves!

Posted by Stephanie at 4:12 PM