Sorry for my radio silence over here this week, we've been busy bees!

Sunday evening we got back from a quick weekend in VA to attend the wedding of Dan's elementary school friend Kevin. We had a great time, but I didn't take any pictures at the ceremony and took only a few at the reception... 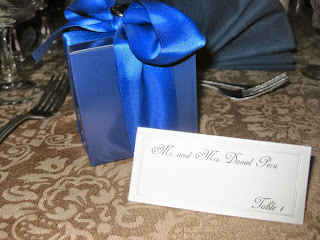 Our first placecard as Mr. and Mrs! 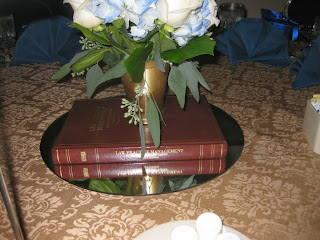 The bride and groom met at law school so each centerpiece had a law book under the flowers. So cute! 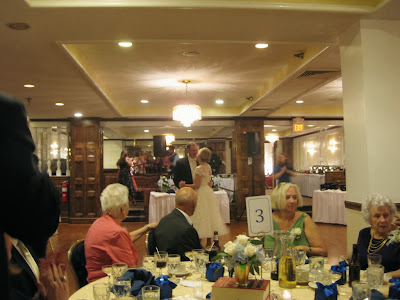 The bride and groom's first dance!
I danced my feet off (literally, they hurt so much by the time we left) and drank a lot of wine and had a really great time!

When we got back, we went into crunch mode with Dan's house. For the last 8 months we've been married, we have lived at what was "my house" before we got married. Dan moved most of his stuff over right after our wedding, and we spent several weeks getting his house ready to go on the market.

As "luck" would have it, we accepted an offer at the beginning of September, which was super busy for us. Of the three weekends we were under contract for the house, we were out of town for two of them (one to visit my family and last weekend for the wedding). Plus of the one weekend we were home, I spent all of Saturday in synagogue fasting while Dan spent the day fixing things the buyer requested after the inspection. Already tapped for time off, we spent a lot of long days going straight from work to the house to get it ready.

But, we got it all fixed up and cleared out in time, and this morning we went to sign the papers to officially be a one house family. Hooray!

There's more excitement coming this weekend: I'm on the team for the Cygnus berthing. After some slips and then some conflicts with the range (launchpad availability, basically) and ISS vehicle traffic, Cygnus was finally scheduled to launch last week and rendezvous with ISS last Sunday... while we were still away for the wedding, so I was going to miss it. But then there was an additional slip in the rendezvous plan, to this weekend, so I'm back on. Cygnus is now scheduled to rendezvous overnight Saturday to Sunday, so I'm scheduled for console Saturday for prep and Sunday for the berthing: Cygnus doesn't dock, it is caught by the robotic arm and then moved to the hatch and attached, aka berthing.

Meanwhile, some other news...

Over the summer, I applied and was accepted to an Online MA program for English and Creative Writing. My first class officially started Monday, so I spent a couple evenings this week doing my first assignments. My first paper is due by next Sunday. Exciting and scary... I haven't had homework in 5 years!

What does that mean for the blog? Honestly, I don't know. My priorities are work work first, then school work. Everything else, including the blog, will have to come in whatever time remains. So posting may be a little less than it's been the past couple months. But I'll be around. Now might be a good time to plug Twitter: When I don't have time to write a post, I still have time for 140 characters. Follow me on twitter if you'd like to keep in touch!
Posted by Stephanie at 3:00 PM