After the ceremony, we went straight to cocktail half-hour and then reception.

Announcing the bride and groom! Dan and I entered the wedding to "White and Nerdy" by Weird Al. Originally I didn't have anything particularly fun planned for our entrance and then three nights before the wedding I had Riding Dirty (the original) stuck in my head. Then it came to me! I emailed our DJ to get it added in and he said no problem. I didn't tell Dan, though. Surprise!

We went straight from the entrance to our first dance, but Dan and I aren't very good dancers (just the awkward middle-school-sway here!) so we didn't really want to be all alone on the dance floor for a whole song. Rather than cut the song, I came up with the idea to bring the family/wedding party up to the floor halfway through.

Then we could dance to the whole song but not have everyone awkwardly staring at just us for 3 minutes. We told the wedding party they didn't have to stick with their aisle buddy, they could bring their actual date up to dance. I really loved having everyone up there with us!

After that it was on to dinner. As is traditional, we did a blessing before the meal. We had my two grandfathers come up- one did the Jewish blessing for the wine and the other for bread.

We tossed around the idea of also having someone from Dan's side do a traditional Catholic blessing, but this worked out fine and then it didn't drag on too long. 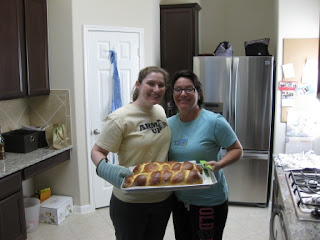 My mom and I baked the challahs a couple days in advance and they came out pretty tasty! (We weren't really supposed to bring in homemade food but nobody asked and we didn't tell.. until now!)

Dan and I were at the sweetheart table (so our wedding party could sit with their dates and other people they knew) and we ate, then got up and started making the rounds. Unfortunately we were too chatty and only made it across half the room before it was time to move on to the next event.


Next up the toasts. Dan's brother and my sister did toasts. His brother called me opinionated (Here I am saying "I have an opinion about that, too!")

and my sister thanked Dan for making me nice and calm. That's sweet. :-/

Cake time! I spent too many hours trying to get just the right color ribbon and the right cake topper for this cake. It turned out really good though, don't you think?

Notice my mouth is open too, when I go to feed Dan. I also smile when I'm behind the camera. I'm weird. Then it was time for the Father-Daughter dance.

I wanted to condense the ceremonial portion of the reception as much as possible, having been to a few weddings where that stuff drags on and you just want to get to the dancing! So, instead of doing a separate Mother-son dance, we just had Dan and his mom come up halfway through my dance with my dad and then we could move on to dancing.


Once the pomp and circumstance was over, I snuck upstairs to change into sneakers. I thought about having pretty reception shoes, but during Ali's wedding a few weeks before my feet were killing me from a whole night of not wearing supportive shoes so I nixed the dressy flip flop idea and went for running shoes. (Keep your eyes open for a Brooks sighting later!)

And, of course, the hora!

I didn't do a bouquet toss (singles shaming!) or a garter toss (I didn't even wear one, they look itchy!). We just kept right on dancing...

We also nixed the "Last Dance" and also the send off (which would have been silly since we were coming back to clean up and then riding the bus back with everyone else) and instead invited everyone up to the dance floor in a big circle during the last song for us to wander around and thank each person for coming. This is kinda a traditional Bat Mitzvah move, but it was a good thing because some people I saw for the only time during the whole reception right then.

And there you have our big, fat, Jewish, Catholic, nerd wedding!