Story:
On Friday morning, Dan and I flew to Chicago. The plan was for us to meet my friends Debbie and Mike in Chicago and share a rental car for the 3 hour drive to Urbana-Champaign where Meg goes to grad school, and where the race was. Yeah, excellent plan. As we were getting on the plane, Debbie texted to tell me that their flight was delayed another hour so we figured Dan and I would hang out at the airport and wait for them. When we landed 2 hours later, their flight had been cancelled due to a problem with the plane. Poor Deb and Mike spent 10 hours in the airport waiting on stand-by list after stand-by list until they finally got on a flight at 6:00! Since they weren't going to make it anytime soon, Dan and I decided to rent our own car. We had to take a bus to the individual rental car offices, so we got on the first one that came, rented the cheapest car they had, and took off. We ended up with a red Mazda 2... with no cruise control (I <3 Cruise Control). It was really tiny, but not a bad ride. I affectionately called it "Little Squirt" all weekend long.
We checked into the hotel, grabbed some groceries, and then headed over to the expo. Meg was running the 5k Friday and the 10k Saturday, the Mini-I challenge so we planned to meet her at the end of the 5k. One critique I have of this race is that it wasn't so well organized. There was a ton of traffic on campus and no signs like "Park here" or "Expo this way!" For someone who goes to the school, it's no problem, but as a first time visitor I was really lost.

We finally found parking, and then found Meg. We hit up the expo just as it was closing, to buy some stylish matching headbands. We grabbed a late dinner with Meg and some of her friends, then headed to bed. Debbie and Mike got in at 12:30, Dan and I were already passed out.

We woke up on a cold, dreary morning, at a delightful 5:00am. Ew! We got dressed, made hot water in the coffee maker to make oatmeal, and then piled into the car to head for the race. It was very cold, so we huddled in the basketball stadium as long as possible before heading to the start line. 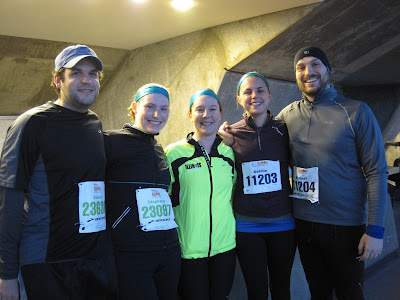 The half and marathon went first, and then we lined up and were off! After running for about a mile I finally started feeling my frozen toes again. After weeks in hot Texas, the cool weather actually felt good while running and we were faster as a result. We planned to run together, even though Debbie is fast and we are slow. Meg's knees were bothering her (the reason she dropped down from the marathon was knee injury) so we stopped to walk. Unfortunately after walking for a mile, it got really cold. Dan and I did not have appropriate running clothes for cold weather and eventually decided to start running just to warm back up. By then I already knew my under 1:14 goal was out the window, but I had a mylar blanket waiting for me and I was dying to get to it!

Compliments for this race- in contrast to earlier organizational difficulties, the course was well marked, well staffed, and the volunteers were awesome. Also tons of people came out of their houses along the course, despite the terrible weather, to watch and cheer. It was really fun (although I could have used another 10 degrees Farenheit!) and I would totally do it (or maybe the half?) again next year!
Posted by Stephanie at 7:30 AM