A variation on the AllRecipes recipe linked above. Boyfriend and I experimented with it on Monday night, to mixed results...

Really it was very easy, the hardest part is that my food processor is tiny so I had to do the chickpeas in 3 batches.

Then... we made pizza!
I spread the pumpkin hummus on a refrigerated pizza dough. Topped with a Fugi apple from my fridge all sliced up, some delicious chicken bacon (I don't eat pork), a mixture of gruyere and mozzarella cheeses, and some caramelized onions and cooked according to package directions. Adorable boyfriend helped me. Here's the beautiful final project: 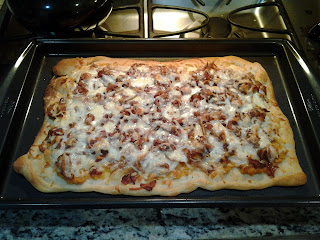 Yum! In the future I might try ground turkey instead, or maybe some arugula or baby spinach on after the oven.

Then there was a bunch of hummus left so I took it to work and set it out in the control center with some cinnamon sugar pita chips. Reviews were mixed, people said it tasted like eating pumpkin pie filling... some liked that, some were freaked out. I didn't bring it back tonight and some folks have demanded it make a comback, so it wasn't a total miss. It is better (healthier) than bringing in doughnuts for the team too!

I still had alot left after that, so when I got up this afternoon I added it to my breakfast (excuse the crappy cell phone pic): 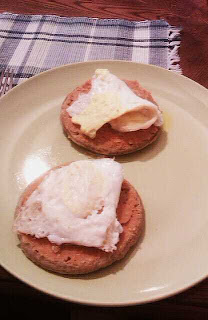 Whole grain Eggo waffles, spread with pumpkin hummus, topped with over easy eggs. I love it when gooey egg yolk gets all over my waffles. A good way to start my night in mission control!

And there you have it, pumpkin hummus 3 ways.

Posted by Stephanie at 5:00 PM

Email ThisBlogThis!Share to TwitterShare to FacebookShare to Pinterest
Labels: recipe