You may have noticed that my running buddy is usually my boyfriend. I read a post once that suggested couples that run together are the skinny, fit types who look sexy even on mile 15. That is most definitely not us. We both get sweaty and gross after only a few minutes, we huff and puff and struggle and are quite far from being attractive by the end. So why do I always run with my boyfriend?


Well, about 6 months ago he told me he wanted to start working out and wanted me to be his running buddy (we were both serious couch potatoes at the time). He ran in high school, so I was immediately intimidated. I have always been afraid to run with trained, experienced runners, ones who ran track with coaches and actually knew what a third mile felt like and what to wear and how to work out a cramp and stretch, etc. However after some poking and prodding and sweet talking, he did convince me to get out the door with him.First time out I let him set the pace and distance- problem was he didn't know how far he could or would go either. That went about as well as you'd expect. We couldn't go on that way.

Always being the girl with a plan, I quickly set to work with some internet searches until I found us one training plan after another, 5ks to run, etc. I do much better when I have a plan and a goal; if I'm just working out to work out, I won't push myself as hard. I don't think he knew what he was getting himself into, but to his credit he's been there beside me for every race, every plan, every morning workout (definitely NOT a morning person) whether he liked it or not.  As we've both gotten into shape its clear that he's faster than me but he keeps me around for motivation. I love looking over mid-puff, sweat soaked, and seeing him puffing right alongside me.

Here's a picture of us after a recent weekend run in the park. He doesn't like being in pictures, but I snapped one while he was too oxygen deprived to protest. 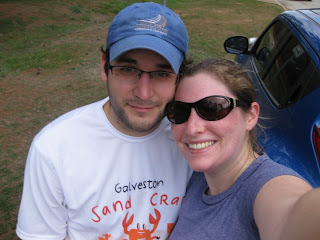 Thanks, Dan, for being my running buddy!